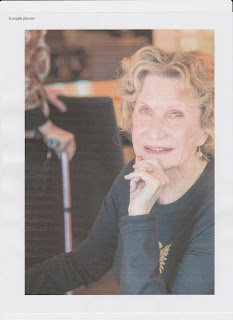 Born and raised in Washington, D.C.’s  Georgetown, Ruth J. Anderson served with several Congressional and cabinet-level officials for over 25 years, including the Federal Communication Commission; Senator Richard Russell, Senate Commerce Committee, Secretary of Commerce, and Postmaster General. Upon the recommendations of Sen. Henry Jackson and Judge Roy Morgan, Ruth joined the Atomic Energy Commission and then U.S. Nuclear Regulatory Commission, as Editorial Assistant and Research Specialist.  Ruth served as President of the Federally Employed, Inc., SMC, which represented over 750,000 Federal employees.
She was selected for the World Who’s Who of Women in Cambridge, England and in 1977, was honored to be the first woman to receive the Silver Medal for Meritorious Service at the U.S. Nuclear Regulatory Commission.  A past member of the New York Academy of Sciences and the Society of Women Engineers, Ruth also served on the Federal Women’s Interagency Board. Ruth Anderson resides in Florida.  Whistle Blower and Double Agents is her first novel. Centered on what Anderson calls “a cover-up of epic proportions,” its an explosive international thriller inspired by actual events.
About the book During a visit to the CIA on a safeguards inquiry, an Atomic Energy Commission nuclear scientist finds that the safeguards program of his agency was flawed and allowed for nuclear material to be stolen from within the nuclear plant and passed on to other countries.  Deeply alarmed, he reported this finding to the AEC, and later to the U.S. Congress and the President. But when the U.S. Nuclear Regulatory Commission chairman falls in love with a beautiful female undercover CIA operative, what follows is a pulse-quickening, globe-spanning page turner that will leave readers wondering where truth ends and fiction begins—if at all…
Welcome, Ruth! Tell us, what is inside the mind of a thriller espionage writer?
While I can’t vouch for what is in the mind of every thriller espionage writer, I can say that I have a healthy active brain, which I inherited from my grandmother, who was a brilliant woman. My grandmother on my mother’s side loved to write and she wrote extensively. In fact, that grandmother was a relative of Charles Lamb, a great writer in England. I’ve loved to read and write my whole life, as well. 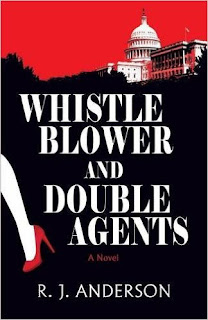 Why should readers buy Whistle Blower and Double Agents?
Readers have said Whistle Blower and Double Agents is exciting and a page-turner. I’ve heard from a number of people who have read the book say they have difficulty putting it down. I hope that readers in search of a good story will find that in Whistle Blower and Double Agents. One writer described it as “straight out of a James Bond movie – chock-full of intrigue, suspense, romance, and action.”  That is certainly high praise.
What makes for a good thriller novel?
First, I like novels that have some basis in reality. For instance, I prefer to read thrillers written by an author who either knows his/her subject or is willing to do the research to learn about the topic he/she is writing about. Some of the best thrillers, in my opinion, are rooted in fact. Whistle Blower and Double Agents certainly fits that bill, as the book is inspired by actual incidents around the 200 pounds of uranium missing, or unaccountable, from a US nuclear power plant.
The question of responsibility pointed in many directions – the man who operated the nuclear power plant in Pennsylvania, the CIA, and even the President. My employer, the U.S. Nuclear Regulatory Commission held hearings where a lot of lying and cover-up ensued at the expense of the brave and later maligned nuclear scientist who blew the whistle on the case. I’m often asked why I believe there was a cover-up. I interviewed the whistleblower and was haunted by the stories for years. You see, the ‘whistleblower’ found out exactly what happened to the uranium, who was involved—and who received the ‘missing’ uranium. Ultimately, I felt that this was a story that needed to be told.
Second, I love when there is a sense of authenticity and realism about the characters in a novel. I had the benefit of personally knowing the characters inWhistle Blower and Double Agents. That experience helped me bring life to these characters so that readers get that sense of reading about real people and not just characters in a book.
When do you write?
I write at night since it is quiet and no one bothers me. It’s important for me to really be able to concentrate while I’m writing. Also, in researching Whistle Blower and Double Agents, I was working with people all over the country and found that night was the easiest time to speak with contacts in other regions. I researched the book thoroughly so that the facts would be correct. That was very important to me, even though it made the writing process tedious and time-consuming.
What has writing taught you?
Writing has taught me how to research a word, observe a person, take note of colors, examine a room, to consider a person’s emotion and what is really conveyed through laughter, a smile, or sadness. In other words, writing has reinforced just how important it is to be observant, to listen and to pay attention.
Writing has also reinforced my belief that if you want to succeed, you have to work hard. The process of writing Whistle Blower and Double Agents was a lengthy one: I started writing the book in the 1970s and would return to it every once in a while over the years. I started writing regularly again around 2001 and finished the book in late 2015. Even though it was a process that spanned decades, I’m so proud of the book and the hard work I put in to it.
Photo and cover art published with permission from the author.
Book Cover Junkie at 11:24 AM