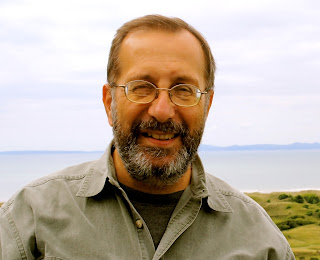 John DeDakis is a novelist and writing coach living in the Washington, D.C. area.  He’s the author of four novels in the Lark Chadwick mystery-suspense-thriller series. John’s protagonist is a feisty young woman who finds her niche in journalism.  DeDakis is a former senior copy editor for CNN’s “The Situation Room with Wolf Blitzer.”  During John’s 45 years in journalism (25 at CNN), he was a White House correspondent, reporter, writer, and editor. He also interviewed Presidents Reagan and Carter, as well as legendary film director Alfred Hitchcock.  DeDakis retired from CNN in 2013 to write full time.  He leads writing workshops around the country and abroad. He’s also taught journalism at the University of Maryland-College Park and at American University in Washington, D.C.

Tell us about your book, Bullet in the Chamber! What is it about and what inspired you to write it?
Bullet in the Chamber is about journalistic integrity – and skullduggery – at the highest level: covering the President of the United States.  My protagonist, Lark Chadwick, is at the pinnacle of her career as a White House correspondent for the Associated Press, one of the nation’s leading wire services.
Professionally, Lark’s immediate supervisor seems to be trying to undermine her at every turn. Personally, Lark’s love life is in peril.  It’s her first day on the beat when the executive mansion is attacked. As Lark scrambles to cover this deadline-a-minute crisis, a mysterious tipster puts her on the trail of the real story.
As much as possible, I try to draw on personal experience for my inspiration.  In the case of Bullet in the Chamber, I drew upon my own experience as a White House correspondent covering the last three years of Ronald Reagan’s presidency.
I also draw upon my grief following the fatal heroin overdose of my youngest son, Stephen, 22, in 2011.  The book’s title and the cover image of a bullet in a syringe reflect my belief that a pusher who sells a fatal dose of heroin should be charged with second-degree murder because it’s like selling a pistol with one bullet in the chamber to a person who will use it to play Russian roulette.

Tell us about your publishing process. What was it like? Did you go indie or the traditional way?
The journey toward publication was long and arduous at first because I was feeling my way. I didn’t know anything about writing fiction because my entire career had been spent doing just-the-facts-ma’am journalism. I read books about writing, experimented by writing short stories, then began writing my first novel, Fast Track.
While I was working on writing the novel, I went to writers’ conferences where I learned about craft and the publishing industry from agents, editors, publishers, and authors. I met Barbara Casey, the woman who would become my agent, at the 2004 Harriette Austin Writers Conference at the University of Georgia in Athens.  By this time I’d been working for ten years on perfecting Fast Track. The manuscript went through fourteen major revisions and Barbara is the 39th agent I queried.
For me, self-publishing was going to be a route of last resort because I wanted my writing to be valued by professionals, not simply by friends and family who might be prone to say they like my writing just to be nice.  So, I was pleased and relieved when Barbara not only fell in love with my work, but got me my first book deal within two weeks after signing me.
Barbara and I have been together ever since.  She tells me Bullet in the Chamber, my fourth, is by far my best.

How did you choose the title for your book? Did it come to you right away, before you started writing the story, or did it come later?
I came up with the title and the cover image of a bullet in a syringe within a day or two after my son, Stephen, went missing.  It had only been a month earlier that he revealed to me that he’d been using heroin, so I strongly suspected his disappearance was related to his heroin use.
I didn’t actually start writing the novel until eight months after Stephen was found dead in my car. The cause of death, according to the coroner: “heroin intoxication.”  But my grief was still too raw and I abandoned the project for nearly two years before trying again – and succeeding. 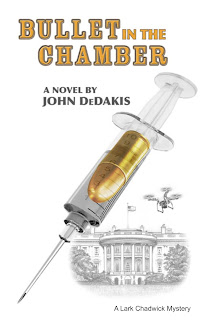 Who is your cover designer for your current book, Bullet in the Chamber, and how did you find him/her?  Did you have a basic idea of what your book cover would be like?
The bullet in the syringe image stuck with me ever since my son Stephen went missing.  Finally, when I neared the end of the writing process, I turned to my cousin Christine Ganas, an illustrator in Chicago, and asked her to take my description and turn it into an image.

How was your experience working with Christine?
Christine was fantastic to work with.  I’ve known her since she was born, so we’ve got a great rapport.  She took my initial idea and played with it, giving me a variety of images to consider.  Some had art only, others added text.

I gave her feedback on the adjustments I wanted her to make.  For example, I didn’t like all the blood because I felt that was an over-dramatization that detracted from the bullet in the syringe concept.
I asked Christine to add images of the White House and a drone because those images give a prospective reader additional strong visual cues about the novel.  I then submitted them to my agent, who passed them on to the publisher.

I assumed that the publisher, Ron Chepesiuk, and his art department, would, once again, come up with their own idea, but I at least wanted to give Christine’s efforts a fighting chance.

Christine and I were both surprised and pleased when Ron chose Christine’s entire cover.  He only added “A Lark Chadwick Mystery” at the bottom.

Check out Christine Ganas. She’s awesome!
Here’s her website: www.cgstudio9.com  and her blog:  6gart.wordpress.com
She’s in the process of revamping her cyber presence, so if those links don’t work, Google “Christine Ganas Illustrator” to find her.