Brooks Eason loves stories - reading and writing them, hearing and telling them. He also loves music, dogs, and campfires as well as his family and friends.

Brooks has practiced law in Jackson, Mississippi, for more than 35 years but has resolved to trade in writing briefs for writing books. He lives with his wife Carrie and their two elderly rescue dogs, Buster and Maddie, and an adopted stray cat named Count Rostov for the central character in A Gentleman in Moscow, the novel by Amor Towles. In their spare time, the Easons host house concerts, grow tomatoes, and dance in the kitchen. Books, who has three children and four grandchildren, is also the author of Travels with Bobby—Hiking in the Mountains of the American West about hiking trips with his best friend.

Visit Brooks online at: www.brookseason.com.
Find out more from the publisher's website: https://www.wordcrafts.net/books/fortunate-son/ 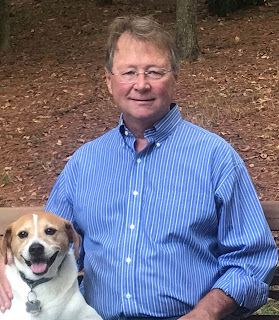 Interview:
Tell us about your book. What is it about and what inspired you to write it?
Fifteen years ago, on the eve of the birth of my first grandchild, a fascinating story fell into my lap. I was adopted as an infant, had wonderful parents, never searched for my birth mother, and never would have, but I was found as a result of litigation in four courts in two states because I was a potential heir to a fortune from my birth mother's very wealthy grandfather. My granddaughter and I were born under almost identical circumstances. My birth mother got pregnant when she was a freshman in college, my daughter when she was a sophomore. The circumstances were the same, but the times were very different, and my daughter got to keep her child, who has grown into an extraordinary young lady. On the day she was born, I learned my name was Scott Francis for the first year of my life. It was too good of a story not to write.
Tell us about your publishing process. What was it like? Did you go indie or the traditional way?
I was lucky, and it was easy. I chose a small, independent press, WordCrafts Press in Nashville, that was recommended to me by an author friend. I sent in my submission, they said they would love to publish my book, and we signed a contract the next day.
How did you choose the title for your book? Did it come to you right away, before you started writing it, or did it come later?
A songwriter wrote and recorded a song about the story of my adoption several years ago and called it "Baby Boy Francis," which is what I was called in the litigation before they knew who I was. Initially the book was going to be Baby Boy Francis with some subtitle. I was thinking Fortunate Son of Two Mothers, but others observed that readers would think I was raised by two women who were married to each other. So we decided to leave out the Two Mothers and swapped the title and subtitle. I like how it turned out.
Tell us about the cover design process. Did you have a basic idea of what your book cover would be like?
Not really. We were thinking we would go with a young woman who would represent my birth mother, but we wound up using a photo of me taken in 1960, the year I turned three.
Who is your cover designer and how did you find him/her?
My publisher chose the designer. I had no direct contact with the designer. 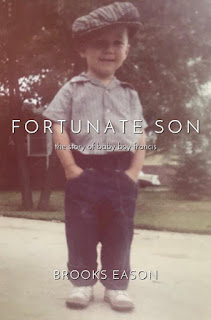 How was your experience working with the designer?
It was indirect but very good. I'm very pleased with the cover.
What has been the readers’ response to your cover? People love it, both front and back. The photo of me suggests the period in which the story is set. I'm wearing a cap and have my hands in my pockets and my pants rolled up. The photo on the back is of my birth mother, who was quite a beauty. I don't know whether it was taken before or after I was born. Her family, who are my family too now, gave it to me. They also gave me two portraits of her, one on her wedding day in 1964 when I was in the first grade and one painted the year she turned fourteen. They've been very generous.
What tips would you give to authors who are looking for a cover designer?
I don't really have any tips because I never looked for a designer, but in terms of a design, my advice is to use something that catches potential readers' eyes and makes them want to open the book and read it.
Anything else you’d like to say about your book?
I hope people will read it. I won't brag on the quality of the writing because my parents taught me not to brag, though I worked very hard on it and I'm happy with it. But it's not bragging to say it's a fascinating, compelling story, not because of who I am but because of the amazing sequence of events and the other people in the story, including my birth mother, who was beautiful and rich but lived a short, tragic life; the wonderful parents who raised me; and my brave daughter and extraordinary granddaughter. Writing about them has been a pleasure.