Author Rocco Lo Bosco Talks about the Cover for his Book, 'Ninety Nine'

praise from readers, many of whom called it “life changing.”  His current novel, Ninety Nine, is published by LettersAt3amPress. Lo Bosco also has a nonfiction book in press with Routledge (2016), co-authored with Dr. Danielle Knafo, a practicing psychoanalyst, entitled Love Machines: A Psychoanalytic Perspective on the Age of Techno-perversion. He is currently working on his third novel, Midnight at the Red Flamingo. Additionally, he has edited papers in the fields of psychoanalysis and the philosophy of science and has also worked as a ghost writer.

Check out his book on Amazon
Connect with Rocco on the Web:
www.roclobsoco.com, www.twitter.com/roclobosco, www.facebook.com/roclobosco
Interview:
Tell us about your book! What is it about and what inspired you to write it?
My book is about a poor and mixed––mine, yours and ours–– Italian-American family fighting desperately to survive in Brooklyn in the early 1960s. The story centers on the two (step) brothers living in a family threatened by psychological fragmentation from within, dangerous levels of poverty and two vicious loan sharks who will have no trouble killing the father if he doesn’t find a way to pay their boss. Meanwhile the two boys run with a small gang, The Decatur Street Angels, led by one of the brother’s cousins, a dark-minded genius who invents wild and daring exploits for the group that become progressively more dangerous during the summer of 1963. One of the brothers is involved in his first (and secret) love affair with an older woman while the other is losing his mind over the abandonment of his mother. The event streams of the book culminate at the novel’s end in a stunning and unexpected climax.
The novel creatively draws on my early years growing up in Brooklyn, but its inspiration emerged from two very specific things: a dream and a book.  When I was five years old I had a dream that has stayed with me my entire life, a dream that in essence predicted the character and quest of my life.  The dream appears in the book, and it will become clear to the reader why that very dream inspired the novel.  The second inspirational element came from finding a book I was never supposed to see. When I was fourteen I found it in the bottom of a box that held my father’s war memorabilia—a 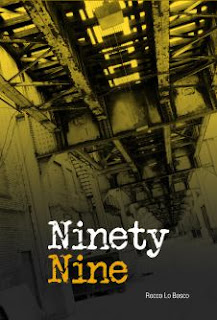 large, government-issued volume about the Second World War. It contained far more pictures than text. I returned to this forbidden book repeatedly and viewed images that literally altered the trajectory of my life and shaped my particular interests in human endeavor. I knew I could not remain silent. Though I did not yet know that I would write, I knew that I would not want to pass through this life quietly, hunkered down in some existential bunker until the danger passed.  At fourteen I already knew the danger never passes. That forbidden book appears in Ninety Nine, but it was also part of the inspiration for Buddha Wept.

Tell us about your publishing process. What was it like? Did you go indie or the traditional way?
I published with an independent small press, LettersAt3amPress, because the publisher, Michael Ventura, whose fiction and nonfiction writing I have followed and greatly admired for decades, read my novel, loved it and wanted to publish it.
How did you choose the title for your book? Did it come to you right away, before you started writing the story, or did it come later?
The title of the book is taken from the dream I mention above.
Tell us about the cover design process. Did you have a basic idea of what your book cover would be like?
The family in the novel lives alongside the Myrtle Avenue Elevated. They can see the faces of the people in the train as it passes their tenement, shaking it and them with a deafening roar. The cover had to feature that El, what else? My daughter is a graphic artists, and she found just the right angle for the shot––beneath the black El that appears to continue infinitely in the distance, everything in the image overlaid in caution yellow. It is a cover that both moves and disturbs the viewer. It captures the spirit of the novel beautifully.
Who is your cover designer and how did you find him/her?
I helped make her for I am her father.
How was your experience working with the designer?
She knew within minutes what to do. It was easy.
What has been the readers’ response to your cover?
Everyone loves it so far.
What tips would you give to authors who are looking f.or a cover designer?
My daughter did covers for both of my novels. She is an outstanding graphic artist. My advice is to find an outstanding artist and to look at his or her work before you ask them to do a cover. See if their designs vibe with your taste. If so, and they are eager to work with you, have them read your book. Then discuss what might best convey the spirit of your work before they try a cover prototype. Creating a good cover is as important as having a good title.
Anything else you’d like to say about your book?
Read it. You won’t be sorry.