The Second Death by T. Frohock 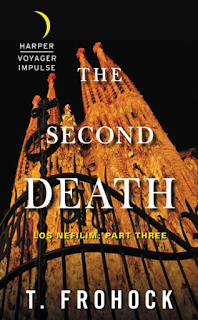 Title: The Second Death
Author: T. Frohock
Release Date: March 29, 2016
Publisher: Harper Voyager Impulse
Genre: Historical Fantasy
Format: Ebook
Save the world, or save his family… For Diago Alvarez, that’s the choice before him. For unless he wants to see his son Rafael die, he must do the unthinkable: Help the Nazis receive the plans to the ultimate weapon. And while Diago grows more comfortable not only with his heritage, but also with his place among Guillermo’s Los Nefilim, he is still unsure if he truly belongs amongst them. In a frantic race to save the future of humanity, Diago is forced to rely on his daimonic nature to deceive an angel. In doing so, he discovers the birth of a modern god—one that will bring about a new world order from which no one can escape. The Second Death is the final chapter in T. Frohock’s haunting and lyrical Los Nefilim trilogy, which bestselling author Mark Lawrence has called “a joy to read.”

T. Frohock has turned her love of dark fantasy and horror into tales of deliciously creepy fiction. She currently lives in North Carolina where she has long been accused of telling stories, which is a southern colloquialism for lying.