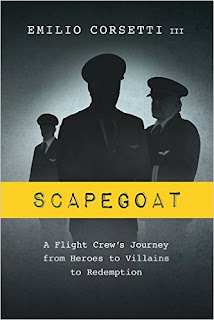 "This is the kind of case the Board has never had to deal with-a head-on collision between the credibility of a flight crew versus the airworthiness of the aircraft." NTSB Investigator-in-Charge Leslie Dean Kampschror

On April 4, 1979, a Boeing 727 with 82 passengers and a crew of 7 rolled over and plummeted from an altitude of 39,000 feet to within seconds of crashing were it not for the crew's actions to save the plane. The cause of the unexplained dive was the subject of one of the longest NTSB investigations at that time.

While the crew's efforts to save TWA 841 were initially hailed as heroic, that all changed when safety inspectors found twenty-one minutes of the thirty-minute cockpit voice recorder tape blank. The captain of the flight, Harvey "Hoot" Gibson, subsequently came under suspicion for deliberately erasing the tape in an effort to hide incriminating evidence. The voice recorder was never evaluated for any deficiencies.

From that moment on, the investigation was focused on the crew to the exclusion of all other evidence. It was an investigation based on rumors, innuendos, and speculation. Eventually the NTSB, despite sworn testimony to the contrary, blamed the crew for the incident by having improperly manipulated the controls, leading to the dive.

This is the story of an NTSB investigation gone awry and one pilot's decades-long battle to clear his name.

Scapegoat: A Flight Crew’s Journey from Heroes to Villains to Redemption is available at Amazon and B&N.

Emilio Corsetti III Talks About His Book Cover
You can’t judge a book by its cover. That may be true, but a lot of people do judge a book by the cover. Having an appealing cover is extremely important. You can’t design the cover until you have a title. The original title for Scapegoat was Spiral. I went through probably twenty or more different subtitles before settling on the following: Scapegoat: A Flight Crew’s Journey from Heroes to Villains to Redemption. So the title/subtitle now conveys a little about what this story is about.
The next step was coming up with a design that helped to further define the story. I was involved in every step of the process. We eventually narrowed the design ideas to three. I then did a poll on my website. You can view the poll in the post help pick a book cover. The winning concept portrays the mystery in the story. The silhouettes of the three pilots lets the reader know that this is a story about real people and not just an investigation. The font and the yellow stripe are meant to further convey the similarities that this story has with a criminal investigation as opposed to an NTSB investigation.
Another consideration for me was that I wanted the cover to stand out against other aviation titles. If you browse aviation books, you will notice a lot of them feature images of aircraft and the words Flight or Aircraft. While I hope to attract readers of aviation books, the larger audience are readers of nonfiction narratives and true stories.

Emilio Corsetti III is a professional pilot and author. Emilio has written for both regional and national publications including the Chicago Tribune, Multimedia Producer, and Professional Pilot magazine. Emilio is the author of the book 35 Miles From Shore: The Ditching and Rescue of ALM Flight 980. The upcoming book Scapegoat: A Flight Crew's Journey from Heroes to Villains to Redemption tells the true story of an airline crew wrongly blamed for causing a near-fatal accident and the captain's decades-long battle to clear his name. Emilio is a graduate of St. Louis University. He and his wife Lynn reside in Dallas, TX.
For More Information
Book Cover Junkie at 12:00 AM