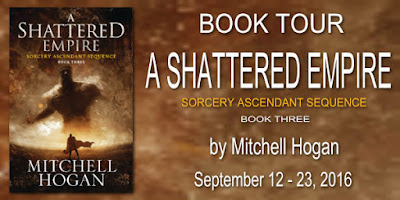 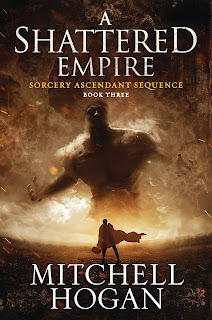 In this gritty and breathtaking conclusion to the Sorcery Ascendant Sequence, the award-winning fantasy series, a young sorcerer must learn to wield his extraordinary powers to defeat two warring empires.

In a battle of armies and sorcerers, empires will fall.

After young Caldan’s parents were slain, a group of monks raised the boy and initiated him into the arcane mysteries of sorcery. But when the Mahruse Empire was attacked, and the lives of his friends hung in the balance, he was forced to make a dangerous choice.

Now, as two mighty empires face off in a deadly game of supremacy, potent sorcery and creatures from legend have been unleashed. To turn the tide of war and prevent annihilation, Caldan must learn to harness his fearsome and forbidden magic. But as he grows into his powers, the young sorcerer realizes that not all the monsters are on the other side.

And though traps and pitfalls lie ahead, and countless lives are at stake, one thing is certain: to save his life, his friends, and his world, Caldan must risk all to defeat a sorcerer of immense power.

Failure will doom the world.

When he was eleven, Mitchell Hogan was given the Hobbit and The Lord of the Rings to read, and a love of fantasy novels was born. He spent the next ten years reading, rolling dice, and playing computer games, with some school and university thrown in. Along the way he accumulated numerous bookcases filled with fantasy and sci-fi novels and doesn’t look to stop anytime soon.

His first attempt at writing fantasy was an abysmal failure and abandoned after only one page. But ideas for characters and scenes continued to come to him and he kept detailed notes of his thoughts, on the off chance that one day he might have time to write a novel. For ten years he put off his dream of writing until he couldn’t stand it anymore. He knew he would regret not having tried to write the novel percolating inside his head for the rest of his life. Mitchell quit his job and lived off dwindling savings, and the support of his fiancé, until he finished the first draft of A Crucible of Souls.

He now writes full time and is eternally grateful to the readers who took a chance on an unknown author.

A Crucible of Souls won the 2013 Aurealis Award for Best Fantasy Novel.

Mitchell lives in Sydney, Australia, with his wife, Angela, and daughter, Isabelle.

Mitchell Hogan is giving away a paperback copy of Books One and Two of the Sorcery Ascendant (A Blood of Innocents and Crucible of Souls)!