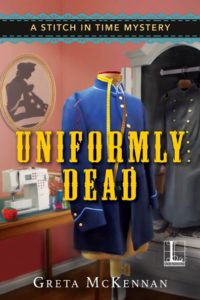 Historical seamstress Daria Dembrowski has her work cut out for her as she searches for a killer's pattern . . .

Daria has come up with a brilliant new plan to expand her seamstress business beyond stitching wedding gowns—historical sewing. And with Civil War re-enactors setting up camp in her hometown of Laurel Springs, Pennsylvania, she has plenty of opportunities, including one client playing a Confederate colonel who's a particular stickler for authenticity.

But soon the small-town peace starts coming apart at the seams as an antique doll is stolen from a Civil War exhibit and the cranky colonel is found impaled by his own bayonet. When Daria's brother is suspected of the theft and a bridal client's fiancé is accused of the murder, Daria is determined to untangle the clues to prove their innocence. She needs to get this case sewn up fast, though, before the murderer re-enacts the crime and makes her history.