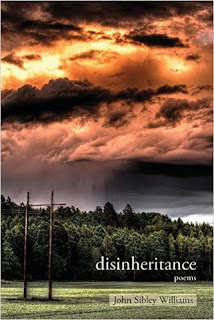 A lyrical, philosophical, and tender exploration of the various voices of grief, including those of the broken, the healing, the son-become-father, and the dead, Disinheritance acknowledges loss while celebrating the uncertainty of a world in constant revision. From the concrete consequences of each human gesture to soulful interrogations into “this amalgam of real / and fabled light,” these poems inhabit an unsteady betweenness, where ghosts can be more real than the flesh and blood of one’s own hands.

Designing just the right book cover is a difficult task, all the more so with poetry, which rarely focuses on a single theme, plot, or set of characters. How to communicate each poem’s metaphor and the entire collection’s mood in a single image? I was lucky to be working with a university press, Apprentice House, that works closely with its authors on each stage of the design process. In my experience, most publishers that have accepted a manuscript keep the author at arm’s length during the pre-publication process. But Apprentice House allowed me to not just critique the two covers they created but even design my own for their approval. And so the final cover is based on my own design, which was expertly tweaked by the press’ designer, Itzayana Osorio.

Over the course of a few weeks, I poured through hundreds of diverse images, weighing each to see how they matched my collection’s settings, central images, themes, and overall mood. But the moment I found this potent, mysterious photograph, the cover immediately came together.

Apart from the gorgeous scene, haunting storm, and muted yet still vibrant colors, the specific components of this rural landscape also attracted me. Fields are common settings for my more nature-infused poems, and my mind (and therefore my words) often returns to images of dense forests and atmospheric skies. But, more specifically, there were two significant visual ingredients that speak to the overarching metaphor of the entire book.

The storm: The various relationships in Disinheritance are defined by a kind of murkiness, an overcast sense of disconnect. From a couple struggling with a miscarriage to grandparents who, after so many years, still remain emotionally absent from each other, the characters in these poems always seem on the verge of storm. Or in the eye of one. Yet, through the murkiness and basic human disconnect a bit of light peeks through. They are contrasting beauty against gloom, tempest against hope. Aren’t we all? So this cover image strikes just the right tone. The imposing clouds, dark as they may be, are sort of glowing. There is beauty behind them. There is a sun, a dawn, a new day doing its best to shine through.

The power lines: Implying connection, communication, conversations begun and ended within the short span of time of a phone call, the power lines in this image match Disinheritance’s overall aim of portraying raw human emotions in a real world setting. They also imply a connection (questionable as it may be) between people and nature. It could be argued that our need to communicate with each other is scarring nature, but it could equally be argued that human inventions are already an integral part of the landscape. In many ways, poems are like the calls that travel over these lines: brief, beautiful moments of attempting to reach out and speak to someone else. 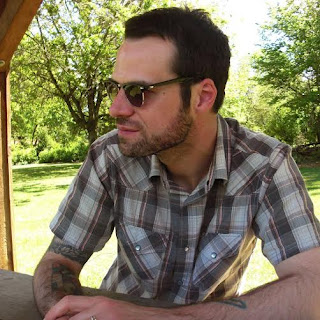