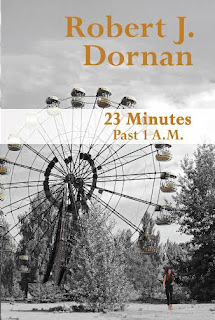 Title: 23 Minutes Past 1 A.M.
Author: Robert J. Dornan
Publisher: Independent
Pages: 550
Genre: Historical Fiction
In the early morning of her sister's wedding day, Mila Kharmalov stared in stunned silence at the coloured sparks streaming from Reactor Four of the Chernobyl Nuclear Plant.  At that very moment, her life and the lives of everyone she knew changed forever.

Years later and on another continent, Adam Byrd was writing biographies for everyday people looking to leave their legacy in book form. When the woman he loved phoned from Kiev offering him the chance to write the story of a lifetime, he jumped at the opportunity not realizing that his voyage would be a bumpy ride through a nations dark underbelly. With the help of his friend's quirky cousin, Adam is nudged into a fascinating adventure of love, greed, power and psychotic revenge, culminating with a shocking finale.

23 Minutes Past 1 A.M. is a work of fiction based on factual events from Chernobyl and villages throughout Ukraine.

On April 26th, 1986, Reactor Four of the Chernobyl Nuclear Plant suffered a massive explosion, shooting millions of radioactive isotopes into the early morning sky. 23 Minutes Past 1 A.M. is a work of fiction based on factual events that occurred before, during and after the blast.

The weekend of April 26th was supposed to be a weekend of celebration for the Kharmalov family but instead a horrific accident set them on a grueling tale of deceit, revenge and loss.

I am Robert J. Dornan and I wrote 23 Minutes Past 1 A.M after writing a same-titled song lyric. I had written and edited other books but never anything that required extensive research so 23 Minutes became a learning experience on many different levels.

The Motherland Calls is a monument in Volgograd, Russia that commemorates the Battle of Stalingrad.  The Arc De Triomphe in France and the Statue of Liberty in New York are two more examples of landmarks or monuments that symbolize an event or a philosophy.

The first day of May in the Soviet Union was a day of celebration of military power and Soviet unity. In the nuclear city of Pripyat, the day would include the opening of an amusement park that included bumper cars and a Ferris wheel.  Most of the research I studied claimed that the amusement park never sold a solitary ticket yet I did find a few articles that stated otherwise, saying that the park was opened the day of the explosion in order to calm the populace. Either or, the Ferris wheel to me, represents the death of the city of Pripyat.  A death caused by inexcusable ineptitude and the incalculable destructive power of nuclear energy. The word Chernobyl incites memories of failure and danger. The Ferris wheel incites memories of a loss of innocence and hope.

I found and purchased the book cover image from the web and two designers, Melissa Tovar and Cheryl Perez put the finishing touches to the book cover.  It took five revisions to final product.

Thanks for inviting me to your unique blog and with any luck, you’ll invite me back.  I do wish to add that if any of your readers wish to contact me about 23 Minutes Past 1 A.M. or environmental solutions, I can be reached at jackcityguy@gmail.com 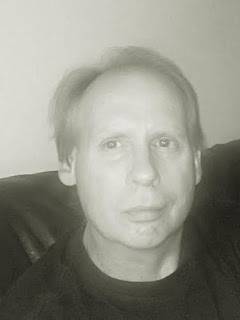 Robert J Dornan is someone who wishes to leave a better world to his children. He realizes that the odds are slim but he will do whatever he can to increase the probability of success.  He is always open to discuss new and innovative ideas and hopes someday to see the building of a functional solar city as well as a fair and community-driven compensation system.

Robert’s latest book is the historical fiction, 23 Minutes Past 1 A.M.