The Tigress and the Yogi Book Blast!

Hot off the presses! THE TIGRESS AND THE YOGI by Shelley Schanfield is available now! Sign up to win a paperback copy of her book or one of 5 ebooks! 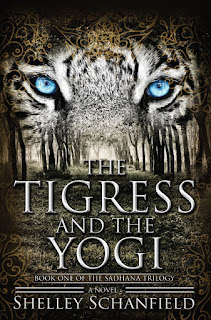 A tigress speaks to the outcaste girl Mala, and as she flees in terror, she encounters an old yogi. She offers him hospitality. As an untouchable, her very shadow may sully the holy man, but he accepts, repaying her kindness with stories that awaken her hunger for forbidden spiritual knowledge. Soon after he leaves, she is orphaned and enslaved, but the warrior goddess Durga appears in a vision and offers her hope.

Thus begins her quest for liberation, on which she meets gods and goddesses, high-born Brahmins and lowly keepers of the cremation grounds, outlaws and kings, and young Prince Siddhartha Gautama, who is prophesied to become the Buddha. She finds happiness for a brief time, but when she loses everything, her quest goes terribly wrong. She becomes an outlaw warrior, worshipping the dark goddess, Kali. She masters occult powers but descends into madness, misusing the supernatural gifts the goddess bestows, and when she again encounters the old yogi, she must decide whether to continue on the path of bloody vengeance or seek transcendence through the power of yoga.

The Tigress and the Yogi is an historical fantasy that brings to life the vivid mythical world of ancient India and transports the reader to the Buddha's time in a story filled with love and fear, anger and desire. This visionary novel creates a memorable portrait of a powerful woman, her extraordinary daughter, and the men they challenge and inspire. It examines the yearning for spiritual transformation and inner peace, and the ways in which the pursuit of wisdom and compassion can go terribly wrong.


Fragrant trees shaded the grove, though open patches among the leaves admitted some dappled sunlight. After the thick, dense forest, this place was like a spacious and cool green temple. There was a tall, slender stone pillar set in a circle of stones in the very center. The snake-loving Nagas, the most fearsome of the hidden forest tribes, must have sacrificed here once. Nagas had not been seen near the village in years, but everyone still feared them. Sometimes when a village man disappeared, people whispered that the dark ones had sacrificed him to their Great Mother, She who was ancient as the earth.
Mala shrugged off a whisper of unease. It was so peaceful and beautiful, there could be no danger. She crawled to a tree trunk and curled up against it to rest awhile. The birds and insects remained silent. Her own breathing was loud in her ears. It felt good just to rest her hand on her belly as it rose and fell. Soon she was aware of nothing else.
Her back against the tree and her head nodding, Mala slipped into a strange new place of lights and sounds. The tree’s roots cradled her and the earth’s coolness was like a soothing caress. Light fell from the leaves above like drops of water. Then she gasped.
On a tigress’s back, a many-armed, beautiful goddess appeared in radiant splendor, waving hands carrying weapons. One hand the goddess held before her breasts in a strange gesture, thumb and forefinger touching. The other she held out toward Mala, and from its upward-facing palm shot a beam of light. Mala prostrated before the vision.
“Om, Divine One,” Mala said. “Om!”
The bejeweled goddess dismounted from the tigress and with her two free hands lifted her ruby and diamond garland from around her neck, smiling as she did so.
I am Durga, Mala. Durga held out the garland. One day this will be yours. As Mala reached for the sparkling necklace, the red jewels began to drip blood. Mala cried out.
She woke. The vision flitted at the edges of consciousness like a wild animal hiding in the forest’s shadows. Dusk was approaching. In the distance, there was something or someone: a horse whinnied, human voices called and laughed. Or did she imagine it? Was Durga only a dream?
No. The warrior goddess was real. Warriors had strength and courage. It was a sign. Mala must be strong and courageous, too. But what did the jewels dripping blood mean?
That when a warrior fights for justice, blood is shed. 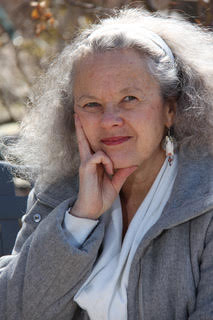 Shelley Schanfield’s passion for Buddhism and yoga arose sixteen years ago, when she and her son earned black belts in Tae Kwon Do. The links between the martial arts and Buddhist techniques to calm and focus the mind fascinated her. By profession a librarian, Shelley plunged into research about the time, place, and spiritual traditions that 2500 years ago produced Prince Siddhartha, who became the Buddha. Yoga, in some form, has a role in all of these traditions. Its transformational teachings soon prompted Shelley to hang up her black belt and begin a yoga practice that she follows to this day.

Because she loves historical fiction, Shelley looked for a good novel about the Buddha. When she didn’t find one that satisfied her, she decided to write her own novels based on the spiritual struggles of women in the Buddha’s time. She published the first book in the Sadhana Trilogy, The Tigress and the Yogi, in 2016 and will publish the second, The Mountain Goddess in early 2017.

Shelley is giving away one autographed copy of The Tigress and the Yogi PLUS 5 ebooks!