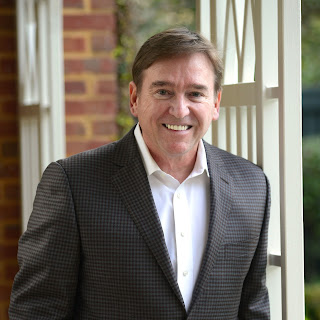 Darden North's mystery and thriller novels have been awarded nationally, most notably an IPPY in Southern Fiction for Points of Origin.  The Five Manners of Death joins his other novels Wiggle Room, Fresh Frozen, and House Call. Darden has served on author panels at writing conferences including Killer Nashville, Murder on the Menu, SIBA Thriller Author Panel, and Murder in the Magic City. To book Darden for a book club, book signing, or presentation contact: Darden@DardenNorth.com. A board-certified obstetrician-gynecologist practicing at Jackson (MS) Healthcare for Women, Darden North is Chairman of the Board of Mississippi Public Broadcasting Foundation and member of the Editorial Board of the Journal of the Mississippi Medical Association. He lives in Jackson, Mississippi, with his wife Sally and enjoys family, travel, and, outdoor activities. The Norths have two adult children, who also work in the medical field.
Connect with Darden North on the web:
Website: www.dardennorth.com
Blog: http://www.dardennorth.com/blog.html
Facebook
Instagram: instagram/dardennorth
Twitter: @dardennorth
Interview:
Tell us about your book!
The Five Manners of Death is my fifth mystery/suspense novel. It is available in both hard- and softcover print as well as in eBook. In The Five Manners of Death, there are five ways to die. Natural cause, suicide, accident, and undetermined are soon crossed off Aunt Phoebe’s list, leaving surgeon Diana Bratton to believe that homicide is the only way left. However, the police prove her wrong. Diana learns that murder is indeed her family secret.
Tell us about your publishing process. What was it like? Did you go indie or the traditional way?
My new novel is published by WordCrafts Press, a small traditional press. 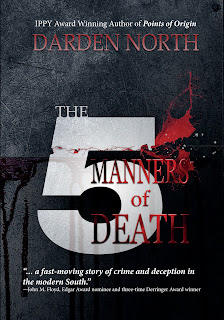 How did you choose the title for your book? Did it come to you right away, before you started writing the story, or did it come later?
The initial working title was The Butter Club. Next came When the Bee Stings (Read the book and you’ll see the significance of that title!) One of my advance readers, my mother Evelyn, suggested The Five Manners of Death, and I think the final title is dead on.
Tell us about the cover design process. Did you have a basic idea of what your book cover would be like?
Mike Parker, the editor at WordCrafts Press, asked for my input to the company’s art department regarding the front cover. I told him I could see a big numeral 5 and some blood. He sent me the design, and it was dead on too! I am also very pleased the dustjacket for the hardback edition. I gave a sneak peek to a reader friend, and she called the cover’s art design “Fabulous!”
Who is your cover designer and how did you find him/her?
The cover designer is by David Warren, a member of the WordCrafts Press team.
How was your experience working with the designer?
Seamless.
What has been the readers’ response to your cover?
Edgar Award-nominated author John Floyd told me that this is the tale readers are looking for. He described The Five Manners of Death as “… a fast-moving story of crime and deception in the modern South.”
What tips would you give to authors who are looking for a cover designer?
A traditional publisher (even a small, independent one) should include the cover design as part of the publishing agreement, and, hopefully, request the author’s input as in my case. However, I believe there are many graphic designers with multiple tools at their disposal who would love to help someone who is self-publishing and should do so economically.
Anything else you’d like to say about your book?
Let me quote author Martin Hegwood (Jackpot Bay) about the thriller, The Five Manners of Death: “a face-paced ride so filled with twists and turns that it leaves us breathless. North gives us just the right details to make … us want to know what happens next, and that keeps those pages turning.”