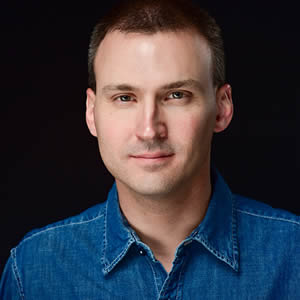 A self-described “broken Christian,” John Herrick battled depression since childhood. In that context, however, he developed intuition for themes of spiritual journey and the human heart.

Herrick graduated from the University of Missouri—Columbia. Rejected for every writing position he sought, he turned to information technology and fund development, where he cultivated analytical and project management skills that helped shape his writing process. He seized unpaid opportunities writing radio commercial copy and ghostwriting for two nationally syndicated radio preachers. The Akron Beacon Journal hailed Herrick's From the Dead as “a solid debut novel.” Published in 2010, it became an Amazon bestseller. The Landing, a semifinalist in the inaugural Amazon Breakthrough Novel Award contest, followed. Publishers Weekly predicted “Herrick will make waves” with his next novel, Between These Walls.

His latest novel, Beautiful Mess, folds the legend of Marilyn Monroe into an ensemble romantic-comedy. Herrick admits his journey felt disconnected. “It was a challenge but also a growth process,” he acknowledges. “But in retrospect, I can see God's fingerprints all over it.”


Connect with John Herrick on the web:
www.johnherrick.net
facebook.com/johnherrickbooks
@JohnHerrick
Interview:
Tell us about your book! What is it about and what inspired you to write it?
Del Corwyn hasn’t had a hit film since his Academy Award nomination 40 years ago. He’s desperate to return to the spotlight but teeters on bankruptcy. Del is a forgotten legend—until, while combing through personal memorabilia, he discovers an original screenplay written by his once-close friend, Marilyn Monroe, who named Del as its legal guardian. The news goes viral. Suddenly, Del skyrockets to the A-list and has a chance to revive his career—if he’s willing to sacrifice his friend’s memory and reputation along the way.

Years ago, I read a biography on Marilyn Monroe and learned the actress was forced into a mental institution against her will. That ordeal frightened her because she was trapped, all alone, and couldn’t do anything to stop it.
I thought to myself, “Even though they released her, the experience must have left scars. Nobody could escape that predicament unchanged.” I sensed a story and couldn’t shake the idea. I sought a way to delve into that experience while respecting her memory and presenting her as a human being who had vulnerabilities like you and I.

Tell us about your publishing process. What was it like? Did you go indie or the traditional way?
I worked with a small indie press. It allows me more freedom to experiment while bearing in mind the commercial aspect of the book.
How did you choose the title for your book? Did it come to you right away, before you started writing the story, or did it come later? 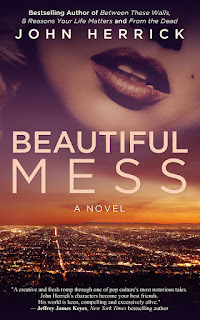 Titles seem to come to me early. The title Beautiful Mess seemed to incorporate Marilyn Monroe’s personal dilemma. It also provided an apt description of my novel’s four main characters—and human beings in general. Each of us is a beautiful work of art, but we’re all a mess!
Here’s a fun little fact regarding the subtitles of Parts One, Two and Three: Each subtitle is the name of one of Marilyn Monroe’s films, and they appear in chronological order. The subtitles foreshadow what’s ahead in the book, but they also parallel Marilyn’s career. Each of the four main characters symbolizes a facet of the legendary actress. In fact, Nora Jumelle is a blatant modern parallel. And for those familiar with Marilyn’s backstory, the tone of each storyline section mimics Marilyn’s life story.
Tell us about the cover design process. Did you have a basic idea of what your book cover would be like?
I love collaboration and have the opportunity to be involved in every aspect of the book, not just as a writer, but in the book design, its market positioning, strategy. In most cases, I end up finding the cover image because, as the author who knows the book’s content best, I want an image that tugs at my gut and draws my subconscious. In my “desk job” career, I manage projects that are a blend of creative, analytics, marketing and technology. So I’m used to maintaining a degree of control and operating as a pseudo-creative director. However, people I work with will tell you I’m a big believer in giving people the freedom to operate in their fortes—when they know you trust them and they have the independence to excel, their best ideas will arise. I want to acknowledge where my strengths end, where others’ strengths begin, and where we work well together. Sometimes I’ll trust someone with complete control.
Beautiful Mess is the first book where the designer took total control. The branding would stay the same, but I hadn’t found the right image. The designer did such a terrific job, my input was minimal! I selected my preferred comp (after getting opinions), and I asked him to change the title from white to a different color to warm it up a bit. Frankly, I was stumped with how the cover should feel. The novel features an ensemble cast and a legendary actress as part of the backstory. I knew how to treat it as a movie poster or video cover,  but not as a book cover. (I hate to say this, but a perfect idea finally arrived as I wrote this. Better late than never, huh?!)
Who is your cover designer and how did you find him?
For Beautiful Mess, the designer’s name was Dane Low, who operates a small business with a couple of others. I found his work online. Along with searching for the right cover image, I comb through portfolios and keep an eye out for designers who have done something similar or whose work suggests they could meet the need. I also make sure their work matches the standards of the New York houses or, if they’re not quite there, if I’d be able to coach them across that line. With the emergence of ebooks, tons of freelancers claim to be book designers but don’t seem to know the industry standards. You need to understand the market. Customers subconsciously recognize when something isn’t right. When that happens, it creates doubt—and it’s never good when people doubt your product.
How was your experience working with the designer?
Dane was terrific. I’ve been blessed with good designer experiences. Mutual respect and trust go a long way.
What has been the readers’ response to your cover?
The book just arrived in readers’ hands, so we’ll see! But those who have seen the cover seem to like it.
What tips would you give to authors who are looking for a cover designer?
Even though you’re not the designer, being informed will help you contribute to the process and enable you to offer educated opinions. Study book covers by the hundreds. Study the physical books, including the spine and back cover. Concentrate on the New York houses. They’re the trendsetters. And those trends change, so never stop studying them. Look for patterns in terms of images, fonts, color, balance, element sizes. Pay special attention to books that are comparable to the ones you write, because they are your competitors and there’s a reason they look the way they do. Remember, it’s not about what you like, but about what readers like. Once you have a feel for what the standards are, check out designers’ portfolios to see who meets those standards. That seems to eliminate about 90% of the designers immediately.
Anything else you’d like to say about your book?
Beautiful Mess was such a fun story to write! If I did my job well, it will give readers a few chuckles but also cause them to pause and consider life from a different angle. I encourage you to consider giving it a read. Then feel free to contact me at www.johnherrick.net to let me know what you think!