My Brain is Out of Control: Memoirs of a Doctor as a Patient by Dr. Patrick Mbaya 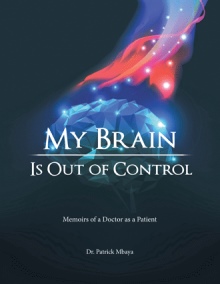 Although Dr. Patrick Mbaya’s illness caused a lot distress and nearly took his life, the emotional symptoms of the depression he developed helped him understand and empathize with patients and how they feel when they become ill. In My Brain is Out of Control, Mbaya, fifty-five and at the peak of his career, shares a personal story of how he suffered from a brain infection in 2010 that caused loss of speech, right-sided weakness, and subsequent depression. He tells how he also dealt with the antibiotics complications of low white cell count and hepatitis. He narrates his experiences as a patient, the neurological and psychiatric complications he encountered, how he coped, and his journey to recovery. Presenting a personal perspective of Mbaya’s illness from the other side of the bed, My Brain is Out of Control, offers profound insight into battling a serious illness.

Clinical Depression is a common illness, different from ordinary sadness, which is a normal reaction. It can affect anyone, including doctors like myself, and indeed I suffered from this, during my illness. It is not a weakness.

It may occur spontaneously in vulnerable individuals, like someone with a family history of depression. Severe stress or traumatic events in childhood, may also make an individual vulnerable to developing depressive illness, later on in life. Recent research has shown that this could be due to the effect of stress hormone cortisol, on the developing brain. Severe stress or loss events (like losing a family member) can cause (precipitate) it. In my case the brain infection I suffered, affected the limbic/emotional brain (see below).

Emotions, and certain behaviours are controlled by the limbic (emotional) brain. This is like a circuit comprising of connections from the brain stem (stem of the brain), to the front part of the brain (prefrontal cortex, the part in front of the motor cortex), then to the medial (inner side) of the temporal lobe structures like amygdala and hippocampus. In my case, it is the left prefrontal cortex, which is next to the motor cortex (which caused weakness on my right side) and the speech (Broca’s) area.

There are different theories about the biological causes of depression within the brain. However, there is a lot of clinical, and research evidence that depression is associated altered levels of chemicals (neurotransmitters) that control emotions, and behaviours. The two main chemicals (neurotransmitters) being serotonin and noradrenaline (also known as norepinephrine). These chemicals are made by the brain from the food we eat, like bananas (I asked my daughter to get me bananas during my recovery phase). Emotions and behaviours like mood, sleep, appetite, enjoyment, concentration, short-term memory, energy, and some forms of thinking are controlled by these chemicals.

There is both clinical, and research evidence that these chemicals become imbalanced, causing symptoms of clinical depression including persistent low mood, tearfulness, poor sleep, lack of enjoyment, poor concentration, short term memory, reduced interest in things, poor appetite, feeling negative (like focussing on past traumatic or unhappy events, or being emotionally affected by current sad events) up to including suicidal thoughts. (Recent research has shown that amygdala become very active in clinical depression, negative traumatic past events tend to re-surface and the individual becomes pre-occupied with these events, feels hopeless, worthless, and has suicidal thoughts, and these symptoms are reversed by effective treatment of depression). These symptoms tend to be worse in the morning (diurnal variation, possibly related to high levels of the stress hormone cortisol) and can improve later on during the day. Like in my case, my mood was worse in the morning. “I was emotional and found myself crying without a moment’s notice.” As depressive illness can affect confidence, energy, motivation, concentration, short term memory, level of functioning is impaired (the ability to carry out activities of daily living, even to the point of being unable to work, socialise or to go to school). The World Health Organization (WHO) found out in a study (1990), comparing medical illnesses, that depression was four in the league table, as a cause of health-related disability. They estimated that by 2020, it will rank second to heart disease!

Current research has shown that severe stress increases the levels of stress hormone cortisol, which in turn reduces serotonin, noradrenaline, and brain-derived neurotrophic factor (BDNF, also known as brain fertilizer, which protects against cell death by cortisol), in the brain, causing depression.

Mbaya Patrick. My Brain Is Out Of Control. Author House. September, 2016

Dr. Patrick Mbaya is a medical doctor specializing in psychiatry. He is a consultant psychiatrist and honorary clinical lecturer in psychiatry at the University of Manchester, United Kingdom. He has a special interest in mood and addiction disorders.