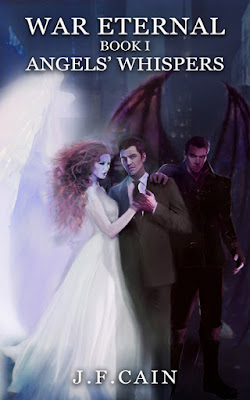 Alex Meyers, a dynamic, global entrepreneur, has an advantage that no other human has ever had: he is protected by Aranes, the Superior of the Angels. While he is skiing, he dies in an avalanche, but his all-powerful protector breaks one of the ethereal world’s most important Rules and brings him back to life. Alex falls head over heels in love with the beautiful Angel, who appears to him in human form. But she disappears just as suddenly as she had appeared.
While he searches for Aranes, Alex discovers her true identity and that he actually might be the high-ranking Celestial Abaddon, who is mentioned in the Revelations prophecy as the one who will defeat Lucifer.
The man who fate has thrust among the world’s superpowers is now living a nightmare. He wants to evade Lucifer’s pursuit, find out who he truly is and once again see the only being he has ever loved. And the only way to do it is to make the ultimate sacrifice.

Angels’ Whispers is the beginning of an epic tale set in modern times. The eternal war between Light and Darkness is at a critical turning point: Angels and Demons, invisible to mortal beings, battle for dominance in the physical world, while Guardians, Vampires and Werewolves, who live among the humans, find themselves on opposing sides in a deadly power game.

When they had left the road and its noise far enough behind them, Alex jerked to a stop. He turned to Aranes, let her hand go and grabbed her by the arms.
“Who are you? Or should I ask what are you?”
They Angel looked him steadily in the eye, not speaking. She had come to the physical plane to prepare him for what was to follow and this was the best way to show him that there were some things that couldn’t be said.
“What do you want from me?” Alex continued. “Has some competitor put you up to approaching me?”
“No, it’s nothing like that,” Aranes said hurriedly to allay his undue worry.
The storm that had risen in Alex’s eyes seemed to calm and the frothy-wave-like silver streaks in his irises began to roll gently against their deep blue backdrop.
“Fine! Then could you explain some things to me?”
Besides everything else she had to do, the Angel also had to leave hints about her nature. Soon her protégé would replay their discussions and would analyze her every word to reach some conclusions.
“I can’t right now,” she replied, capturing his gaze in hers so that she could send him non-verbal messages.
Her calm expression and steady gaze made Alex wonder. She seemed sincere. But why didn’t she give him a specific answer?
“What’s going on?” he asked, confusion written all over his face. “Tell me, what should I think? You appear out of nowhere, drag me out of an avalanche, treat me as if I’m special to you and then drop me, only to appear out of nowhere again, knowing that I’ve been looking for you. Don’t you also think that all this is a little strange?”
“Yes, it is,” the Angel agreed. “Please, be patient. Soon you’ll have the answers you need.”
Alex would not give in.
“I’d rather have them now, starting with who you are.”
“That question will be answered soon, too,” Aranes replied and rested her palm in the middle of his chest. “Look into my eyes, Alex, and tell me. Do you believe I would ever harm you?”
He looked bewilderedly down at her hand on his chest. It felt as if a wave of warmth passed from her palm into his body, filling him with an indescribable sweetness and wonderful emotions unknown to him until now. He looked up and searched her unearthly eyes for an answer to this transcendental feeling, and found much more. In her effort to calm him and win his trust, the Angel unveiled her soul and let him see how she felt.
Alex saw her eyes overflowing with love and was stunned.
This woman seemed to adore him. It couldn’t be! She knew him so little. To be precise, she didn’t know him at all. You don’t know her either but you’re crazy about her, he thought in response.
“No,” he admitted, now calm. “But I don’t like all this mystery. How did you know I’ve been looking for you, and why doesn’t the cabin’s owner know you?”
“There’s always an explanation for everything”, Aranes replied, her gaze fixed on his. “Isn’t that so?”
“Why don’t you just tell me who you are? Are you really called Theodora? What’s your last name?”
“I don’t have a last name.”
“That’s not possible. Everybody has one,” Alex insisted gently.
“I don’t, because I don’t need it.”
Aranes let a brief moment of silence elapse to give him time to think.
He was looking at her in puzzlement. He didn’t know what to think. He didn’t know anyone without a last name. Where had this woman come from?
“Alex,” the Angel went on. “You have an extremely well-developed intuition. Listen to it and stay calm, no matter what happens.”
Her mention of his intuition caught him completely unawares. Alarm bells started ringing in his head again.
“What’s going to happen? And how do you know about my intuition?” he asked with a bewildered and at the same time suspicious look.
Forced to provide only that information which his mental state could handle, Aranes didn’t answer his question. She went on:
“There are things you cannot see, but can sense. Don’t try to explain everything using reason.”
“If I don’t use reason I’ll go mad!” Alex said with a measure of the irritation that lay dormant inside him and just wouldn’t be expressed in its true form.
He was annoyed with himself for not protesting, and for letting her put his head through the wringer without asking for anything more than the necessary explanations—and yet he was happy they were together. It was crazy, is what it was!
“Being calm and collected in times of crisis is characteristic of a superior nature, and I believe you are one of them,” Aranes told him, wanting to prepare him for what would happen in the immediate future.
Superior in nature was the last thing that Alex felt right then. Reason was bombarding his mind with questions and warnings, and there he stood, helpless to react. He wondered at his calm. He should normally have freaked out when she mentioned his intuition and with everything else she told him. But his will seemed to have surrendered to a hypnotic suggestion. What held him in its grip?
Not having any clue about the supernatural powers used on him, the answer was simple: her exquisite face, captivating scent, divine body and basically everything about her, her intellectual qualities included of course, that drove him delirious with love and made him want to make her his at all costs. It was a good excuse for his passiveness, otherwise why would he be acting like a mentally retarded adult? It wasn’t like him at all. 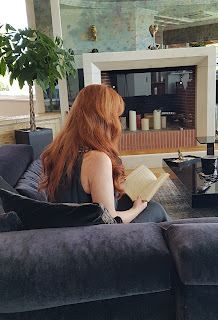 J. F. Cain is a writer with a restless mind who spent years of her life reading and traveling. But of all the places she has been to, her favorite is a house in the mountains where she can focus on her writing. She is a seeker of knowledge who transcribes the results of her studies in her books. Her favorite pastime –other than reading and writing- is scouring libraries. However, she has lately convinced herself that she enjoys shopping just as much, as well as spending time with family and friends –the few that can still tolerate her frequent and extended periods of absence.