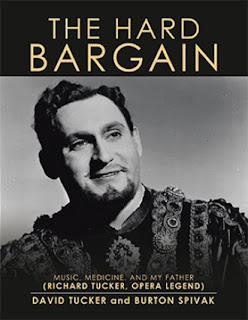 The Hard Bargain describes in vivid detail and elegant prose the clash of wills between a famous father and his hard-driving middle son. Richard Tucker, the American superstar tenor from the golden age of the Metropolitan Opera, demanded that his son become a surgeon. Rejecting his father’s wishes, David wanted to follow his father onto the opera stage. Their struggle over David’s future—by turns hilarious and humiliating, wise and loving—is played out in medical and musical venues around the world. The father and son strike a bargain, the hard bargain of the title, which permitted both dreams to flicker for a decade until one (the right one, it turns out) bursts into sustaining flame. This heartfelt memoir about a son’s struggle against the looming power of a magnetic father is conveyed in a moving narrative that one reviewer has called “the most dramatic exploration of the private life of a legendary singer in the annals of opera literature.”

Dr. David N. Tucker is a retired ophthalmologist with degrees from Tufts University and the Cornell University Medical College. After an internship at Mount Sinai Hospital in New York City, he was a commissioned officer in the U.S. Public Health Service at the National Institutes of Health, doing research in infectious diseases during the Vietnam War. As chief resident under Dr. Edward Norton at the Bascom Palmer Eye Institute in Miami, he accepted a one year fellowship with the eminent Colombian microsurgeon Dr. José Barraquer and with other prestigious ophthalmic surgeons in Europe. For over thirty years, Dr. Tucker was in private practice in Cincinnati and was the director of the Department of Ophthalmology at Cincinnati Jewish Hospital for twenty-seven years. After retiring in 2004, he taught part time as a clinical assistant professor of ophthalmology at the NYU School of Medicine. He and his wife Lynda celebrated their golden anniversary in 2013 and have four children and nine grandchildren.
Burton Spivak received his PhD in American History at the University of Virginia where he was a Woodrow Wilson Fellow and a Virginia- Danforth Fellow, and taught at the University of Texas at Austin, Brown University, Bates College, and the University of Virginia. He is a former recipient of the Stuart L. Bernath Lecture Prize for outstanding achievement in teaching and scholarship, awarded annually by the Society for Historians of American Foreign Relations. His book Jefferson’s English Crisis: Commerce, Embargo, and the Republican Revolution (Charlottesville, Virginia, 1979) was included in C-SPAN’s American Presidents: Life Portraits list of twenty-five recommended books on Thomas Jefferson. Spivak also received his JD degree from the University of Virginia where he was on the Law Review and Order of the Coif, and practiced tax law in New York City for many years. He currently is an Adjunct Professor of History at Sacred Heart University in Fairfield, Connecticut.

DAVID and burton are GIVING AWAY A $25 GIFT CARD!


A Taste of My Mind


Straight From the Authors Mouth


As the Pages Turn


She Writes
My Bookish Pleasures