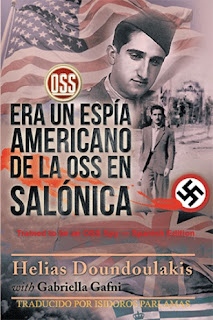 Imagine the horror: One day in May 1941 that did not presage anything special, a boy from a small town in Crete faces an unexpected threat - the invasion of the German troops. Run to take cover - your first meeting in a series of meetings with the destination. Imagine the adventure: The boy and his brother work on behalf of the SOE, a secret nucleus of British intelligence. When the patriotic organization enters the peephole with cross-focus of the Germans, they immediately turn to the mountains of Crete, where, even during the day, they hide from the enemy. The danger lurks at each step. Imagine the greatness: The child is trained to become a spy for the OSS or the Office of Strategic Services (Office of Strategic Services, the only one of the central US SOE: Executive of Special Operations (Special Operations Executive). Imagine the risk: During a secret mission in Thessaloniki, the spy soldier runs the risk of losing his life daily, operating a radio under the noses of the Nazis. Will the German police eventually find out? Imagine the value: If you are arrested, the soldier-spy will swallow a poison pill to avoid suffering horribly under torture. Many times your escape is a matter of seconds. Imagine the victory of living at 92 years old to tell your story. Everything is true! The imagination is overcome. You could say that it is a script made for a movie - a story starring the game of life that is necessary for all to read. The story of the author, along with the stories of other agents, was the theme of the documentary "Campo X:

Helias Doundoulakis was both an acclaimed Civil Engineer, an inventor, an author, a family man, and the patent holder of the world's largest radiotelephone "Arecibo Antena" is survived by his wife, Rita, their four children, and his ten grandchildren.

HELIAS IS GIVING AWAY A $25 GIFT CARD!

Tuesday, September 25
The Hype and the Hoopla
Write and Take Flight

Thursday, September 27
Fiction to Fruition
From Paperback to Leatherbound