The Water is Wide by Laura Vosika 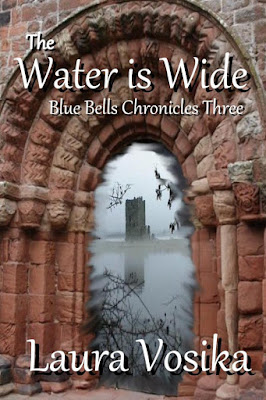 After his failure to escape back to his own time, Shawn is sent with Niall on the Bruce’s business. They criss-cross Scotland and northern England, working for the Bruce and James Douglas, as they seek ways to get Shawn home to Amy and his own time.

Returning from the Bruce’s business, to Glenmirril, Shawn finally meets the mysterious Christina. Despite his vow to finally be faithful to Amy, his feelings for Christina grow.

In modern Scotland, having already told Angus she’s pregnant, Amy must now tell him Shawn is alive and well—in medieval Scotland. Together, they seek a way to bring him back across time.
They are pursued by Simon Beaumont, esteemed knight in the service of King Edward, has also passed between times. Having learned that Amy’s son will kill him—he seeks to kill the infant James first.

The book concludes with MacDougall’s attack on Glenmirril, Amy and Angus’s race to be there and Shawn’s attempt to reach the mysterious tower through the battling armies. 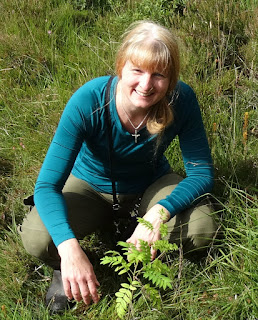 Laura Vosika is a writer, poet, and musician. Her time travel series, The Blue Bells Chronicles, set in modern and medieval Scotland, has garnered praise and comparisons to writers as diverse as Diana Gabaldon and Dostoevsky. Her poetry has been published in The Moccasin and The Martin Lake Journal 2017.

She has been featured in newspapers, on radio, and TV, has spoken for regional book events, and hosted the radio program Books and Brews. She currently teaches writing at Minneapolis Community and Technical College.

As a musician, Laura has performed as on trombone, flute, and harp, in orchestras, and big bands. She lives in Brooklyn park with 5 of her 9 children, 3 cats, and an Irish Wolfhound.

Her latest book is the time travel/historical fiction, The Water is Wide.