Q&A with 'Where To? How I Shed My Baggage and Learned to Live Free' Jennifer B. Monahan 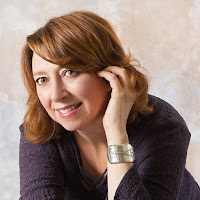 Jennifer B. Monahan is a business strategy consultant, shaman and coach who helps people all over the world live courageous lives. Her first book, This Trip Will Change Your Life: A Shaman’s Story of Spirit Evolution (She Writes Press, 2016), has won six literary awards, including two first-place Body, Mind, Spirit Book Awards and a 2017 National Indie Excellence Award. Her second book, Where To? How I Shed My Baggage and Learned to Live Free, was published in April 2019, and describes her personal journey through Guatemala, Japan, Cambodia and Thailand as she faces down some of the greatest losses in her life.

She is a regular contributor to Medium.com, Sivana East, and has had articles published on MindBodyGreen.com and Inc.com. Her podcast, Living A Courageously Authentic Life, can be found on BlogTalkRadio.com, and focuses on a variety of topics to help others be true to themselves.

She holds a BA in Mass Communications from the University of Bridgeport (CT), an MBA in Marketing from the University of Connecticut, a Masters in Natural Health from Clayton College, and completed an accredited coaching program through Coach U. Her shamanic training began with a Mayan shaman in Mexico and then expanded to include shamans in Guatemala and her own personal guides.

She currently splits her time between the United States and Guatemala when not traveling and is in the process of writing her third book, a handbook for people looking to define, create and live their courageously authentic life. You can find her online at www.SpiritEvolution.co.

Being an author was never on my bucket list.  But a bad accident and three months of disability leave where I was stuck on my couch gave me the time to write my first book, This Trip Will Change Your Life. The accident also gave me a lot of time to really assess how I had been living my life, which became the starting point for my second book, Where To?.

It ended up taking over 14 months before I could walk without a cast, crutch or brace, but that time allowed me to really think about what it was that I wanted to create with my life. At face value, if you had looked at my life prior to the accident, you would have said that I was living a rich, interesting life and to some extent I was.  But what I wasn’t doing was following my heart, taking some risks and just living.

I took my first big risk when I published my first book.  In it I opened up and shared aspects of myself that I hadn’t really shared before.  But I knew that I needed to do more – I needed to shed the limiting beliefs and personas that I had been carrying with me for most of my life that were preventing me from being “me.” And so I decided to jump right into the deep end and walk away from all of the things that had been giving me a false sense of security about my life – my job and my home – and try living the way I wanted to live.

I had a number of people tell me that I was crazy, but even more people cheered me on and begged me to tell them what – and how – I was doing.  I had people call and email me, asking me how I was able to do what I was doing and looking for advice on how to start living their own authentic lives. It became a no-brainer to write down my experiences. Where To? tells the story of what happened to me, the lessons I learned, and the amazing adventures I had as I learned to live in a way that felt authentic and true to me.

Where To? takes place primarily in the Guatemalan jungle, but also in Japan, Cambodia and Thailand.  It tells how I lived in a thatched-roof hut in a tiny village, connected with local shamans and participated in their ancient rituals, become fully integrated into the daily life of local families, and ultimately faced down some of the greatest losses and long-buried pain I had experienced.  In the book I share the six steps I took to heal and create the life of my dreams and include a workbook for readers to do the same.

I decided to go the self-publishing route after a contract with a traditional publisher fell through.
Once I had finished writing and editing the book, I started to think of my options for publishing. I decided to pitch my book to smaller traditional publishers that didn’t require a literary agent.
I enjoyed going through the thought process to create the pitch materials and found it helped me really hone in on my audience and the selling points of the book.  I sent out about a dozen pitch submissions to editors and was thrilled when one of the publishers that I was really interested in emailed me back saying they were interested in my book and wanted to review the full manuscript.
I sent it over and then waited for what felt like an eternity.  I was at my gate in the Guatemala City airport about to board my flight when I got the email back from the publisher that every author dreams of:

“I am interested in publishing this book.  After reading the first few chapters, I can tell you are a skilled writer who can communicate concepts easily in a style that keeps the reader’s attention.  If the rights are still available, I’d like to present you with a publishing proposal.”

Every person at the gate stared at me when I whooped and jumped up and down.  Of course I said yes.  And then I waited again for the proposal. Ultimately, the proposal didn’t come.  After more consideration, the publisher decided that the genre of my book was not in line with the genres that his firm published and withdrew his offer.

That feedback was what made me decide to self-publish.  I knew the book itself was solid and that it would appeal to readers. The process of self-publishing was easy; my book was available within a month of me making the decision.

The book title was actually the last thing that I did.  I had finished writing the book and was working with my editor for a final round of polishing before starting the publishing process.  At that point I still had a very exciting working title along the lines of “Book Two.” My editor and I began brainstorming names and she came up with Where To?. As soon as she said it, I know it was perfect.  It not only summed up the physical nomadic journey I take in the book (as in: where to next?) but was a great tie to the title of my first book as well.

Once the title of the book was defined, the cover became a lot easier.  At one point I was thinking that the cover should have a taxicab on it, since “Where To?” is the first question a cabbie asks you when you get into a cab, but once the book’s tagline was defined, having luggage on the cover made more sense.

That being said, I created three versions of the cover – two with luggage and one with a woman on a journey – and posted them on social media and through my newsletter to my readers and followers and let them vote for the cover they thought was best given the description I shared.  I ended up using the cover that got the most votes.

I designed the cover myself, using a publicly available photo from Pixabay.com.

Overall the response has been positive.  As I mentioned, giving my readers and followers the opportunity to vote gave me some insights into what appealed to them.  Plus it was a lot of fun!

Thank you, Jennifer! Be sure to check out her book below!

When Jennifer Monahan announced her intention to leave her well-established career as a business strategy consultant and give up her rent-controlled apartment in San Francisco to do a global walkabout for an undetermined amount of time, her friends and family thought she was insane. But 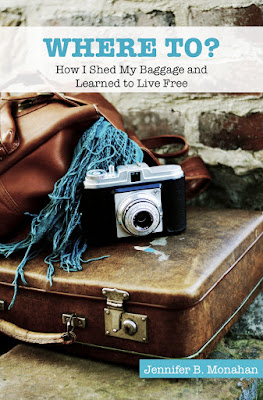 Jennifer was excited about taking the time to truly explore and immerse herself in a variety of cultures, so their skepticism didn’t faze her; plus she was used to traveling alone as a woman with only one carry-on bag. What she didn’t count on was discovering all the excess baggage she had been carrying with her from her past.

WHERE TO? chronicles one year of Monahan’s life, primarily in the Guatemalan jungle, but also in Japan, Cambodia and Thailand. Living in a thatched-roof hut in a tiny village, Monahan connected with local shamans and participated in their ancient rituals, became fully integrated into the daily life of a local family, and ultimately faced down some of the greatest losses and long-buried pain she had experienced. WHERE TO? shares the six steps she took to heal and courageously create the life of her dreams and includes a workbook for readers to do the same.

"Some memoirs tell us stories and open up worlds we never knew, but some open up places in our own hearts and souls that we have wanted to explore and have never given ourselves the chance to do so. Where To? How I Shed My Baggage and Learned to Live Free by Jennifer B. Monahan belongs to the second category of memoirs...While it reads like the memoir of a woman who takes the courage to explore the world, this memoir has powerful spiritual hints. In fact, it is the story of a soul in search of itself. Where To? is a spiritual testament, a book that describes a journey towards inner freedom and authenticity. Many readers will feel the resonance of Jennifer's story in their own lives."