David Schaub is a writer and Academy Award ® nominated Animation Supervisor working in the film industry for more than 25 years. In 2019 he produced and directed the audio adaptation of SPIRITS OF THE WESTERN WILD.  He also developed STORY COMPASS® smartphone app for screenwriters (www.moviemethods.com) in 2017.

Schaub received Oscar nomination for animation in Tim Burton’s ALICE IN WONDERLAND (Disney), along with nominations for BAFTA Award, Saturn Award and Critic’s Choice Award, and won the Golden Satellite Award for Best Visual Effects for his team’s work on the film.


Roger Vizard is a writer and self-taught artist. He was accepted into the animation program at Sheridan College in1987, then worked at Sullivan Bluth Studios in Ireland, then as an animation apprentice on “WHO FRAMED ROGER RABBIT” at Richard Williams’ studio in London.  He later became Williams’ assistant animator on “THIEF AND THE COBBLER.”

After several years working in Europe at studios like Gerhard Hahn in Germany and A-films in Denmark, he moved to Los Angeles in 1993 to work as a story board artist on the first season of Sonic the Hedgehog, then rolled back into animation again after that.  He successfully made the transition to from 2D to CGI on “STUART LITTLE 2” in 2001, and since that time have worked non-stop at animation/VFX studios in Los Angeles.

SPIRITS OF THE WESTERN WILD is a paranormal adventure in the spirit of a Twilight Zone episode, written as a screenplay for an animated feature.  From there it was adapted as an audio drama, along with an illustrated Kindle release.  It was Roger [Vizard], my story partner who originally pitched me the idea for a buddy film with a young cowboy and a crotchety old ghost who refused to believe he was dead.  It was mostly a character premise with some great drawings and situational gags.  We kicked ideas around between ourselves about where the story could go, and ultimately decided to join forces to see if we could shape it into a fully executed screenplay that would sustain itself as an animated feature.  It was the characters that inspired us, and that’s what drove everything down the story path.

I should start by saying that there was never really an intention to publish at all.  This project was written as a screenplay, destined to making its rounds through the Hollywood pitching circuit.

When Roger moved onto another animation gig, I decided to keep chipping away at the next steps toward production.  I had the crazy idea of producing it as an audiobook to make it super-easy for studio execs to absorb on their commute.  No reading required -- just straight-up entertainment for the listener.  Self-funding the film wasn’t an option, but since I was looking for something to direct, I figured I could certainly produce an audio drama!  It was also a great opportunity to demonstrate my directing chops with actors, bringing the story to life in a way that the written page alone could never achieve.  Call it a “movie for your ears.”  The task was more than I bargained for, but I’m happy to say that the movie is all there… minus the visuals  ;-)

Once the audio was completed, I was informed by Amazon that a print (or Kindle) version had to be released before the audio version could be approved.  So that put me into another tailspin… Unfortunately, Kindle doesn’t offer a solution to display screenplays in their native format, which is a strict standard by industry definition.  But I came up with a formatting solution that seems to work pretty well.

Now that the Kindle version is out there, I’m happy that it is.  Not only can you follow along with the audio version, but you also get a first-hand account of how the audio adaptation evolved from the written screenplay.  It’s also a convenient way to share some of the artwork that Roger and I have collaborated on along the way.

There have been several working-titles for this production along the way.  We settled on SPIRITS OF THE WESTERN WILD after the title itself weaved its way into the fabric of the story.  But having worked in the studio system for so many years, I’ve learned to stay flexible and open to new ideas and suggestions as they come. With that said, I’m perfectly happy to adopt a new title as we keep pushing this down the road toward production.  It is certainly not the “perfect title,” so I’m open to suggestions; perhaps something that isn’t quite so “on the nose.”  Maybe I’ll set up a contest for that – with a bounty for a winning title that we can’t resist!

I always had the general concept in mind.  I think the cover is a really important element for marketing a book, especially since people absolutely judge books by their covers.  And movies are judged by their posters and one-sheets.  That’s why we produced a “movie-poster” for our screenplay long before talks of a movie deal or a production plan of any sort.  With so much content out there, I believe that you’ve got to do everything in your power to grab the audience by the throat and not let go.

Our poster spells out everything you need to know about the characters, spirit and tone of the film.  I’m a huge fan of the Drew Struzan movie-poster art.  While our poster doesn’t even touch on his artistic brilliance, the layout is certainly inspired by the composition of his posters.  Having the poster on display also makes it seem “real” somehow.  And in a studio pitch, it’s really easy for execs to envision what the final product could be.  Conveniently, it’s also the same aspect for a book cover, and easily adapted to a square format (like a CD) for the audiobook.

It was designed between Roger and myself.  I did the basic layout based on the Drew Struzen compositions, and Roger fleshed out the line drawings of the characters. Then I picked it up again to do final painting and rendering.

We were pain-in-the-butt perfectionists!  I can’t tell you how many versions we went through until we captured the spirit of the film in its simplest form. The important thing is to capture the essence and tone of the work, with the important beats of the story represented or hinted at in some way.  That is the goal of any good movie poster.  There are some quirky and elusive representations embedded in there.  No spoilers - just subtle hints that become illuminated after you hear the story.  I say HEAR it – because that’s the best way to experience it.

We’ve been getting lots of queries and thumbs-up on social media.  Of course it is very stylized, and specifically suited to the animated feature that we are offering here.

We never really considered looking elsewhere for a designer.  We had already produced so much artwork in the form of beat-boards and story-panels – which are all published in the Kindle Edition of the screenplay. The cover design was just a logical extension of what we had already done.

While this story is certainly framed up as a “Western,” that’s really just the package for a deeper story of loyalty, redemption, and the final ascension that occurs when our destiny is done.  [Sergio] Leone said the same about his films – “they are westerns only in their exterior aspects.  Within them are truths that belong to all parts of the world… not just the American West.”  Using the Western genre as our backdrop, we can strip away modern distractions and focus on the simpler, deeper story at the heart of it all.  I always like to remind people that even Star Wars is nothing more than a John Ford western at its core.

We are going to keep kicking this project down the road, with the goal of eventually making this film.  I started an Instagram feed for anyone interested in following that journey:
https://www.instagram.com/moviemethods/
I thought it would be entertaining to post the twists, turns and writing inspiration as we go. I’m sure there will be lots of discoveries, insights and takeaways on the bumpy road ahead.   Please follow, and enjoy the ride!

This mystical adventure follows a young adventure-seeker named Luther McCleron on a westward journey to learn more about his Grandfather. A series of fateful missteps take Luther far from his 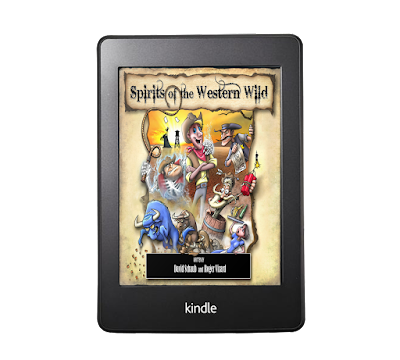 destination to a disheveled little town under the tyranny of a crooked sheriff named Big Willie. It’s here that Luther comes face-to-face with the legendary ghost of Monty: a curmudgeonly ghost who refuses to believe he’s dead. Luther just wants to get back to his quest, but Monty thwarts his plans by using Luther to take out his vengeance on Big Willie.

Through a catastrophic string of events, Luther and Monty find themselves hopelessly entangled in a combative partnership that escalates to the breaking point. Only by reconciling their differences are they able to uncover the profound connections that weave their fates together.

A mysterious book of premonitions, an ominous crow, and ancient Indian drive the mystical tone of this world; conjuring spiritual forces to help steer Luther on his journey through this western “twilight zone.”

All the loose ends resolve in a satisfying story of redemption, loyalty and ascension while exploring the mysterious nature of fate and destiny. Was all of this a coincidence? Or are we guided by ancient “spirits on the wind” that nudge and steer us along our path to assure that we arrive safely at our intended destination in the end?


5 out of 5 stars
A fantastic and Immersive adventure for everyone.
What a wonderful audio book and what a pleasure it was to be on this journey. Not only the adventure was captivating but also everything around it. The sounds effect and voices really bring it all together, you almost feel like you are right there witnessing all this first hand. The production quality is something I have never heard before. Very well done and I highly recommend it.