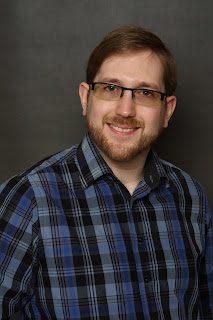 Born on Vancouver Island, Canada, Misha Handman spent his early life immersed in the arts, with one parent a teacher and the other a manager of theatre and opera. Moving across the country to Ottawa, and then Toronto, he began writing at a young age – first writing comics and designing card games for his closest friends and then, buoyed by their approval, gradually expanding out to submissions to magazines and short story collections, and graduating from the University of Toronto with a classic English degree.

Misha has always believed in the importance of entertainment to our health and well-being. He is also interested in our shared fictional history, working in game design to develop collaborative games and story-driven experiences and exploring the new worlds that we are sharing. His fascination with these things led to the development of his first novel, Shadow Stitcher, as an exploration of the English classic “Peter Pan.”

When not writing, Misha spends his time in Victoria, Canada, working as a professional fundraiser for charities – a job he describes as “helping people to help people.” He continues to work on game design on the side, and is always excited to see the myriad ways that people approach story construction and creation, both as a voracious reader of genre fiction and a dedicated player of games.

Shadow Stitcher is a hardboiled mystery set in the 1950s, on what was once the island of Neverland. Decades ago, corporate interests came to the island, looking to industrialize its mysteries, and now they live in uneasy truce with its inhabitants. Basil Stark, the island’s most notorious private detective, accepts a case to find a woman who has vanished, and is almost immediately drawn into mob struggles, dangerous experiments, and deadly new magic.

The original idea that would grow into Shadow Stitcher literally began as a dream, as ironic as that seems. I had been re-reading Peter Pan as part of a separate project, and I had a dream in which I was a pest exterminator wrestling with the morality of killing fairies. As I worked on the idea, it turned into a broader mystery, and eventually became the story of an ex-pirate who didn’t quite fit in trying to find a way to be a better person.

I had experimented with self-publication with a short novella, and it convinced me that while self-publishing is very rewarding for many authors, it wasn’t my preferred choice. As such, I searched for publishers interested in mixed-genre books and emerging authors. I had a few rejections, but each of them gave me useful information that I used to make small edits to my manuscript and re-submit to new markets.

I was fortunate enough to contact EDGE Science Fiction & Fantasy, a local Candian publisher with distribution in the United States and worldwide, at a time when they were in search of new authors.

The working title for Shadow Stitcher was actually “Bad Form”, as per the phrase Captain Hook is obsessed with in the original Peter Pan. During the editing process, we agreed that while it was on-topic, “Bad Form” didn’t adequately underscore to new readers or those less familiar with Peter Pan that this was a fantasy-mystery. It took us several passes to find a title that we felt was both fantastical and hardboiled, but I was very happy with the result.

One of the lovely things that EDGE did before seeking out a cover artist was ask me for a few ideas of what I might want my cover to look like, and to provide a few similar covers for comparison. It was vitally important that the cover both evoke a noir aesthetic and make it clear that this world had magic and wonder in it; from there, the main character standing against a cityscape with a fairy on his shoulder developed naturally.

I submitted my ideas and a few comparison covers, and then was given the first draft of the cover with any notes I might want to make. There weren’t very many! I was fortunate enough to get a great first draft.

Who is your cover designer and how did you find them?

My cover designer was Risa Hulett, a professional designer and illustrator. She was hired by EDGE based on my desired cover, so unfortunately I can’t speak to how they found her.

Very good. We’ve communicated a few times since then, largely to confirm permissions for things like bookmarks with the cover image on them.

The response to the cover has been great! I’ve had several compliments, and the cover specifically has been responsible for at least two reviews that I’ve received. EDGE has even begun selling mugs with the cover image on them to interested readers.

First: look at other covers of books similar to yours, and figure out what you like stylistically. The more clearly you’re able to describe what you want, the better your final result is going to be. Treat the cover description as a small story in its own right. And secondly, talk to people who know! If you’re self-publishing, talk with other writers in the community about who they approached and how it went. If you’re working through a publisher, look at the other covers of books they publish and suggest similar ones.

If you read it, and you like it, let me know! I love to hear what people liked about my work, and I’m even happy to hear what they’d rather see less of. This has been a tricky year for getting out and talking to fans, so I’m happy to do it over the Internet instead.

Basil Stark isn’t the man he once was. A reformed pirate and private detective, he walks the line between criminal and hero, living in the corners of what was once the island of Neverland, its magic slowly fading into the new world of the 1950s.

When a routine missing-persons case turns into a murder investigation, Basil finds himself pulled into a tale of organized crime, murder, unstitched shadows and dangerous espionage. With only a handful of fellow outcasts and a stubborn determination to bring a killer to justice, will he survive the many people who want him dead?