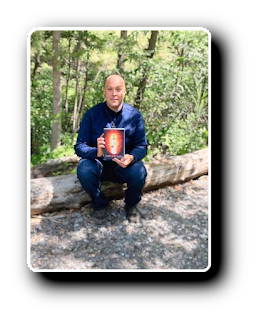 J.W. Baccaro is the author of Prophecy of the Guardian, The Coming of the Light and Blood Dreams. Always a lover of creativity, from works of literature to writing music with his electric guitar; even baking and cooking. When not working on his next story or lost in a good book, J.W. enjoys kicking back with a couple of tasty craft beers and binging on Kaiju movies, 80’s action flicks, Japanese animation and slasher films (particularly the one involving a hockey mask). Heck, he even enjoys a good romantic comedy. Feel free to email him at jwbaccaro@yahoo.com. He lives in upstate NY with his wife Melissa, his son Alexander, his German Shepherd and his three cats.

A Nasharin warrior by the name of Darshun Luthais and a group of companions go in search for the ancient elemental crystals. Objects of great power that became lost in the second age. The enemy is also searching for them, and if found they plan on using them for weapons of mass destruction against not 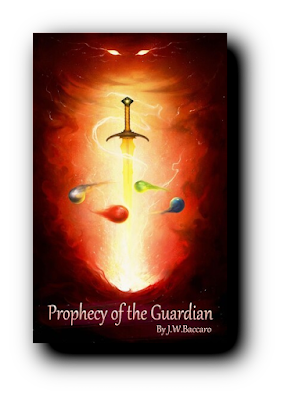 only the forces of Light, but the whole world.

The story begins with the obliteration of the Loreladian army. Invaded by the Cullach—a half man, half boar-like race—the Loreladian people had little time to prepare and found the numbers of the Cullach to be overwhelming. Only four survive the battle, two of them Nasharin warriors (members of a supposed accursed race but live in peace with the Loreladian people). One of the Nasharins, Mirabel Luthais swears to the fallen king that he will lead the Loreladian civilians into safer lands before the Cullach arrive to claim the city, where death would surely follow.

As this journey takes place Mirabel senses the presence of another Nasharin, something he had been sensing since the Cullach invasion, only now it becomes much stronger. He finds it strange because only a handful of Nasharins remain in existence and have lived in Loreladia for the last century. Still, he cannot deny this feeling, this…pull from another living Nasharin—one whose inner power feels extraordinary.

With the help of a fellow warrior (and a horde of beasts this warrior communicates with), Mirabel rescues this Nasharin from a Cullach sacrifice. The Nasharin is just a babe, not old enough to mutter a world. And yet…the power within the child frightens Mirabel. He is not frightened of the child per se, but of what the child means, and the times they could possibly be in, or heading toward, the Prophecy of the Guardian and the Second Great War…

And so begins this magical, heartful and at times brutal story of Darshun (the Guardian) and friends!

The inspiration comes from…well see…creative writing has always been a love of mine. I never had much interest in sports or automobiles. Sure, I know a little bit, but I couldn’t tell you the names of famous quarterbacks or talk for hours about rebuilding an engine block. Creativity has always been my thing in both literature and music. Inspired by authors such as J.R.R. Tolkien and C.S. Lewis (to name a few), I too decided I wanted to create my own vivid world within the imagination…and on paper of course.

I didn’t look around at what genre was most popular in hopes to make a quick buck. I just wanted to write a story that I personally would love to read. A story with not only tons of action and warrior battles, but also filled with heavy emotion. A world where you feel like you’ve made friends with the characters and are a bit sad when the book comes to an end. You miss them!

I’ve always loved classic Good versus Evil tales. True they are a dime a dozen, filled with similar tropes and sometimes a bit cliché. You know, light versus darkness, one chosen character to rid the world of this monstrous evil, magical items, etc. etc. However, just when you think you’ve read something like this before, as soon as you’re enveloped into the story, you see how the tale carries its own uniqueness. Of course, there will be similarities, I can find that in just about every bestselling epic fantasy/sci-fi I read, but each story carries its own flair.

I love when a villain or even a hero begins to question their path, wondering if the task they are trying to accomplish is the right thing to do. Perhaps the Light has a point? Perhaps the Darkness has a point, and looking a little deeper, maybe, just maybe the Light (or whom we call our heroes), isn’t so perfect after all. Besides, all of us know the world is far beyond mere black and white. So, I took all my thoughts, likes and influences and molded them together and out came my book Prophecy of the Guardian: Book One, Guardian Trilogy.

Originally (before this revised edition), I went the traditional way. It was a learning experience I’ll tell you. I was thankful but displeased I had little say over the book covers. And I wanted the story to be a trilogy, but they made it into a five-book series. After three years I got the rights back and as time went on, I revised this story. I listened to the positive feed back and even the constructive criticism I received in past reviews. And so…Prophecy of the Guardian is once again on the market, better than ever with a character and creature list and a map of my world.

I’ll never go traditional again unless it is by a major publisher.

The title arrived much later. I had no idea what I was going to call it. At one point I was going with Guiding the Blue Flame but quickly realized…um, no, that will not work. Ha! So, thinking it over, the main meat of the tale, Prophecy of the Guardian felt best, plus sounds very fantasy oriented, even if the words “Guardian” and “Prophecy” are overused. Together I feel it just works.

I love the new cover. Originally it was supposed to be a small group of companions seated around a golden sphere. But then I went simpler. I love the 4 crystals drawn to look like they’re in motion and circling a golden sword (very important weapon in the story), you see the glaring eyes of an adversary peering down, and what looks like a pit of destruction perhaps indicating the world is heading toward that, destruction. I really love it!

His name is Rosen Simeonov. I found him on DeviantArt. I posted a question, seeking an artist for a book cover. Thankfully, he came to my rescue. I love his work!

Quite pleasant. Very respectful and fulfilling.

So far, everyone loves the covers. I brought them into my place of work to see people’s reactions. It was nice hearing all the different opinions. But all the covers were a hit!

I’ve had a few different people do covers for me before. However, they just didn’t hit that sweet spot I was looking for. I’d say, this is YOUR book, YOUR baby! It’s going to be with you for a long time, just like when you choose a new car and are stubborn about it’s color (like my wife was. She was ready to walk out unless the dealer found her a blue Honda Fit!) So, make sure your cover rocks your heart! You know the book best! And DeviantArt is a great place to search for artists.

It’s a roller coaster. As you begin to climb the tracks/read the pages, it is heading toward a peak. Once you reach that peak, you’re off for a fantastic, emotional and suspenseful ride. I promise you! 😊

❀ORDER YOUR COPY OF PROPHECY OF THE GUARDIAN BELOW!