Guest post: "How The Asset’s Cover Came to Be" by Romance Author Anna del Mar

When I signed my contract with Carina Press, I wasn’t sure how they would go about designing the cover for my debut romance, The Asset. I will confess to a little anxiety. I knew nothing about covers. What works? What sells? But still, I wanted to be involved. Much to my delight, I soon learned that 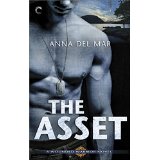 there was a way that ensured that my thoughts and opinions were incorporated into the creative process. It started with the Art Fact Sheet.

The AFS is a tool that collects all kinds of art-pertinent information about the novel, including the tone and mood of the story, location and specific setting details, sensuality level, character descriptions and significant visual elements. As I worked on The Asset’s AFS, I tried to retell the story from a visual point of view.

The AFS went to my editor at Carina Press, the extraordinary Kerri Buckley. She delivered it to the team, which comprised the talented cover design artists plus members from the marketing team. A few weeks later, a cover concept hit my inbox, the sexy cover you see today. I loved it! Relief. The bliss of working with an outfit that knows what they’re doing.

The Asset is the story of a woman desperate to escape her dangerous past and the Navy SEAL who would lay down his life to save her. It takes place in the Colorado Rocky Mountains, which is why the art team placed that gorgeous scenery that you see on the upper right corner. The cover artists drew on my character description to select the warrior’s image and capture the story’s mood. Readers’ reactions? They often describe the cover as “yummy.” I think that’s success. Don’t you?

Ash Hunter knows what it is to run. A SEAL gravely injured in Afghanistan, he’s gone AWOL from the military hospital. Physically and mentally scarred, he returns home to his grandmother’s isolated cottage—and finds a beautiful, haunted stranger inside.

Lia Stewart’s in hiding from the cartel she barely escaped alive, holed up in this small Rocky Mountain town. Surviving, but only just. Helping the wounded warrior on her doorstep is the right thing to do…it’s loving him that might get them both killed.

Soon, Ash realizes he’s not the only one tormented by the past. Pushing the limits of his broken body, testing the boundaries of her shattered soul, he’ll protect Lia until his last breath.

Anna del Mar writes hot, smart romances that soothe the soul, challenge the mind, and satisfy the heart. Her stories focus on strong heroines struggling to find their place in the world and the brave, sexy, kickass, military heroes who defy the limits of their broken bodies to protect the women they love. She is the author of The Asset (Carina Press), the first novel of her Wounded Warrior series and three other novels scheduled for release during 2016.

A Georgetown University graduate, Anna enjoys traveling, hiking, skiing, and the sea. Writing is her addiction, her drug of choice, and what she wants to do all the time. The extraordinary men and women she met during her years as a Navy wife inspire the fabulous heroes and heroines at the center of her stories. When she stays put—which doesn’t happen very often—she lives in Florida with her indulgent husband and two very opinionated cats.