Gin Price has been writing stories since the sixth grade, preferring fantasy to reality, much to the dismay of teachers throughout school. Often finding herself cheering for the underdog, she enjoys writing hard, edgy pieces where characters have to fight their way through tough times and find inner strength they never knew they had in order to succeed. Fascinated by the different paths friendships can take, Gin enjoys delving in to the young adult genre, where relationships can change dramatically from one day to the next. Using knowledge learned from her childhood environment, her writing is often steeped in street life, whether good or bad.

Hoping to show support for art that is often misunderstood, Gin published her debut novel, On Edge, focusing on graffiti and parkour, two expressions dear to her heart. Currently, she is a resident in the Metro Detroit area, living with her loving biologist man, David, her two children, Shyla and Hayes, many reptiles and a troublesome cat named Wallace.
Interview:
Tell us about your book! What is it about and what inspired you to write it?
On Edge is a Young Adult Mystery playing on a Shakespearean theme (R&J) using a graffiti crew vs. a parkour crew. (I encourage anyone who doesn’t know what parkour is, to YouTube it. You won’t be disappointed.) LL finds herself being targeted by a serial-killing graffiti artist, and her brother decides to blame an artist who shows interest in his sister. Threatening to start a gang war over it, LL’s brother forces her to hide her blossoming affection for the enemy while struggling to figure out who the true culprit is. Unfortunately, the person who is guilty might be the same person she’s trying to clear.
Tell us about your publishing process. What was it like? Did you go indie or the traditional way?
This book is traditional. Obviously it is a lot longer road than SP, filled with rock throwing punks in the median. Everyone is telling you everything about your book and you’re not as free to do as you wish—which honestly is better sometimes. LOL However, there is a validation in traditional that self-publishing has a harder time giving you. You really have to learn to be patient with traditional publishing. It is very seductive to have the instant gratification of self-pubbing. 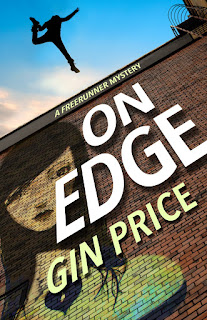 How did you choose the title for your book? Did it come to you right away, before you started writing the story, or did it come later?
The original title was the first thing I had. It has since changed.
Tell us about the cover design process. Did you have a basic idea of what your book cover would be like?
I told the artist that I wanted a brick wall with graffiti on it, preferably with the face of a girl on it, with a freerunner silhouette jumping onto the wall. I don’t think he could’ve done any better without being in my brain. It’s awesome.
Who is your cover designer and how did you find him/her?
Rich Siegle. He designs for the Poisoned Pencil Press.
How was your experience working with the designer?
All I had to do was type up what I wanted. I had the easy part of the job.
What has been the readers’ response to your cover?
Everyone has loved it!
What tips would you give to authors who are looking for a cover designer?
Look at the books they’ve done already. Know what you want and know how to explain it in detail. If there is a style you hate, be honest about it. After a cover is done, it is too late to start saying what you don’t like.
Anything else you’d like to say about your book?
Though On Edge is a mystery that is all about parkour and graffiti, one of the lesser known themes, or the moral of the story, is that when merging schools together to try and save some money for the city, you have to ask yourself if the merge will cost human life. There’s no amount of money you can save that will justify the death of even one student.