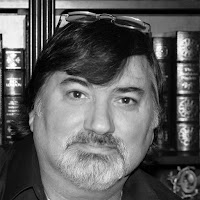 Tj O’Connor is the 2015 Gold Medal Winner of the Independent Publishers Book Awards (IPPY) for mysteries and the author of Dying To Know, Dying For The Past, and Dying To Tell. Tj is an international security consultant specializing in anti-terrorism, investigations, and threat analysis—life experiences that drive his novels. With his former life as a government agent and years as a consultant, he has lived and worked around the world in places like Greece, Turkey, Italy, Germany, the United Kingdom, and throughout the Americas—among others. He was raised in New York's Hudson Valley and lives with his wife and Labrador companions in Virginia where they raised five children. Dying to Know is also a 2015 Bronze Medal winner for the 2015 Reader’s Favorite Book Review Awards, a Finalist for both the 2015 Silver Falchion Award and the Foreword Review’s 2014 INDIEFAB Book of the Year Award.

Connect with Tj on the Web:
·       Website: www.tjoconnor.com
·       Facebook: https://www.facebook.com/TjOConnor.Author
·       Blog:  http://tjoconnorbooks.blogspot.com/
·       Twitter @Tjoconnorauthor
Interview:
Tell us about your book! What is it about and what inspired you to write it?
Dying to Tell is the third book in my series, the Gumshoe Ghost. Stop here. I hate that moniker but my publisher, Midnight Ink, liked it. The stories follow Oliver “Tuck” Tucker, a dead detective—yes dead detective—as he solves murders and unravels secrets from his own family past. Tuck was killed in the opening of Book I, Dying to Know, and returned to solve his own murder. Unbeknownst him, he’s back for more than his own problems. He has a skill, if you will—he can work with the living and commune with the dead. And the dead have a lot to say—especially those seeking justice for themselves. Dying to Tell finds Tuck investigating the murder of a reclusive banker, William Mendelson, who has his own secrets chasing him from World War II Cairo, Egypt. Mendelson was involved in some Nazi subterfuge and it’s taken decades to catch up to him. Each of the stories has three elements: a traditional murder mystery, a historical subplot, and Tuck’s own family lore. Tuck never knew his family—he was raised in foster care—and he’s learning along the way that being dead and back amongst the living is not coincidental. Nor is it unique. He’s always aided by a dashing and daring relative—a prohibition gangster, World War II OSS Operative, a cold war spy... 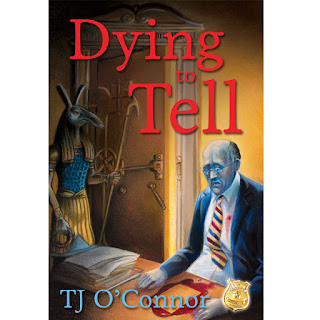 And nothing is as it seems in Winchester, the center of the series’ capers. I was inspired for this book, and the entire series, based on my own experiences and adventures. I’m a former government anti-terrorism agent and now a security consultant. I’ve lived and worked around the world in places most only read about in books. So now, I write stories based, in part, on some of these adventures.  The entire series was born from a 20 year nightmare that haunted me—literally—for years following my work in the first Gulf War. I dreamt I was killed during an operation and came back to earth to find my killers and get justice.  After telling my daughter, Jean, about the nightmare, she begged me to write it as a murder mystery. I did, and landed my agent and first book contract as a result.

Tell us about your publishing process. What was it like? Did you go indie or the traditional way?
I am traditionally published right now. I do so because of my agent Kimberley Cameron. We are, however, exploring indie publishing for future work. The process is painful sometimes and rewarding at other times. I lost a lot of control when we went with my publisher and some of that cost me. I do not like my book covers, back cover copy, or some of the summaries they’ve put out on Amazon and others. But, they are great people and I enjoy a good relationship with them, in particular my editor, Terri B. I am thrilled and thankful that they gave me my first contract. In future work, Kimberley and I will always seek traditional publishing first. But, if she believes in my book and can’t find a taker in the traditional presses, then we’ll go indie. Either way, as long as Kimberley is in my corner, my stories will see print!
How did you choose the title for your book? Did it come to you right away, before you started writing the story, or did it come later?
Titles are important to me. I even fought for them with my publisher. In the case of this series, the titles are very telling. The first book, Dying to Know, literally and figuratively explains Tuck’s—my lead character—entire theme. There’s a murder. There’s a historical reason behind it. And he’s Dying To Know the answers and who killed him. In Dying for the Past, Book II, the murder of a mysterious philanthropist begins a series of murders and other crimes that are all based on the hunt for “The Book,” the journal of a 1939’s gangster who kept notes of all the cooked politicians, spies, and gangsters going into World War II. So everyone in Winchester in 2015 is being killed off because of events in 1930—They’re literally Dying For The Past. And so goes Dying to Tell. William Mendelson is murdered after he decides to tell the secret behind his World War II misadventures in Cairo, Egypt. Unfortunately, those secrets involved more than just him. In doing so, his telling got him—and others—killed. Every was Dying To Tell.
Tell us about the cover design process. Did you have a basic idea of what your book cover would be like?
This is a painful topic. I did have cover ideas but my publisher went with these cartoonish covers often found on cozy mysteries. First, my series is sold as a cozy but it also has a lot of not-coziness to it. I was looking for something more symbolic and less R.L. Stine. I lost. In the many, many reviews I’ve received—both formal and informal—the covers always come up. It’s split about 75% don’t like them, and 25% do. But that’s from those who read the books. I’ve received lots of emails and comments from folks saving that they would not have bought it because of the cover. But after reading reviews, or speaking with me, or for some other reason, did read it and loved it. The cover, however, seems to be my biggest weakness.
Who is your cover designer and how did you find him/her?
It is done through my publisher. I had no vote in the process. No, no, I’m not upset about it … not much.
What has been the readers’ response to your cover?
See Above. 75% of my readers don’t like the cover. As I said, many told me they wouldn’t have bought it because of the cover and only did after either speaking with me, getting a recommendation, or seeing the reviews and hearing the story line.
What tips would you give to authors who are looking for a cover designer?
Unfortunately, I cannot comment on personal experience. I do know many authors who get their own indie press or self-publishing done and find their own designers. I am a lucky one for future books, though. My brother-in-law is a wiz graphics designer and I’ll lean on his expertise to find good covers. My advice to anyone looking for cover art is to ask other authors and get recommendations. There’s entire industry rising up to support indie and self-publishing.
Anything else you’d like to say about your book?
Mystery, history, and mayhem—all with a paranormal twist. Some laughs, some tears, and lots of dead bodies. What more could you want?