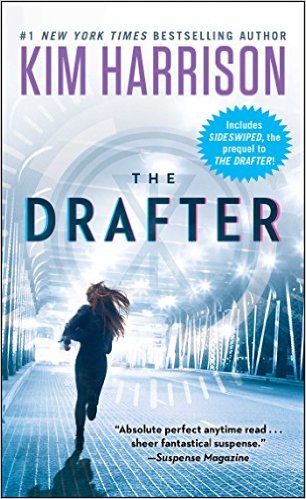 Book Description:
Detroit 2030. Double-crossed by the person she loved and betrayed by the covert government organization that trained her to use her body as a weapon, Peri Reed is a renegade on the run. Don’t forgive and never forget has always been Peri’s creed. But her day job makes it difficult: she is a drafter, possessed of a rare, invaluable skill for altering time, yet destined to forget both the history she changed and the history she rewrote. When Peri discovers her name is on a list of corrupt operatives, she realizes that her own life has been manipulated by the agency. Her memory of the previous three years erased, she joins forces with a mysterious rogue soldier in a deadly race to piece together the truth about her fateful final task. Her motto has always been only to kill those who kill her first. But with nothing but intuition to guide her, will she have to break her own rule to survive?

I’m Kim Harrison, better known for the urban fantasy series, the Hollows, but now have turned my sights to crafting the SF thriller, The Drafter.  I’ve always been fascinated with how cover artists put together something to get the right reader to pick up the book. I am lucky to have two covers for The Drafter, a more literary image for the hard cover that was aimed to grow my male audience, and a more thriller-oriented image for the mass market to hit my usual urban fantasy readers. I’m hard pressed to pick my favorite of the two, but the image of a woman confidently running into danger does convey the action, strength, and pacing of the book.

Being traditionally published, I have less say in the cover than someone self published, but that’s never bothered me. I was given a choice of several covers, and we finally settled on one, giving it some further tweaks to get the Opti symbol on the cover and the colors to allude to crisp, clean action. I also asked for the burst, which is the small blot of color that highlights the “also includes” message that had originally been on the back, and all of this leaving space for hopefully a few nice words for some of my peers.

I know cover purists demand that their cover be a recognizable scene from the book and the figure on it match the image of the main character, and I will admit that once I know what the cover model is wearing, I might tweak the text to include it, but it’s rare that I will ask the cover artist to bring anything closer to the reality of the text. For example, Peri Reed would never have hair that long; it’s a huge liability in a fight. She’d be wearing something more polished, too, and perhaps have a sexy, brooding man running beside her. But the image we went with conveys the feeling of the book: danger, urgency, independent thinking, bold action, and a futuristic setting that is not too far from our own to be unrecognizable. And that works for me.
Book Cover Junkie at 11:34 AM