Cover Talk: From Ashes Into Light by Mouw Gudrun 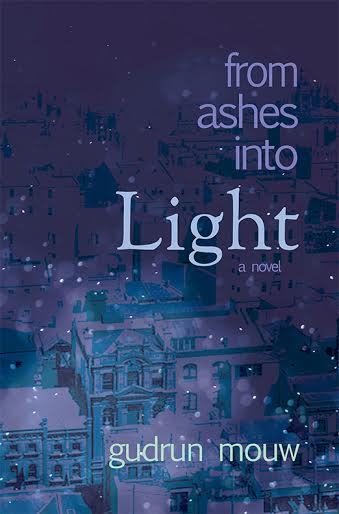 From Ashes into Light is a transpersonal tale of epic tragedy, spirituality, family, and personal redemption. It is told through three distinct voices: the haunting story of Ruth, a Jewish adolescent during Kristallnacht in World War II Austria, Saqapaya, a stalwart Native American from coastal California during the time of the Spanish conquest, and Friede Mai.

Friede is born during WW II to a Bavarian soldier and an East-Prussian mother. As those around her struggle with the inevitable chaos and paradox of war, young Friede opens her heart to gruesome enemies, at times helping her family members escape atrocities.

With war behind them, the Mai family immigrates to the US, where Friede, her veteran father and ex-refugee mother, struggle with reverberations of trauma, suspicion and prejudice. Upon leaving home, Friede meets her spiritual guide and confidant in her fiancé’s Rabbi, who helps her see that the voices from her past are teachers and the horrors of history also contain beacons of light.

Planning the book cover actually started with the title, because I did a lot of back and forth with the title. There were many, let’s say two dozen, versions of the title and nothing really seemed right. The second-to-last title was Out of the Ashes. And it was for this version that my publisher paid for a designer to make a cover.

The two of them worked together on a version of the cover, showing me about four versions. The three of us agreed on a black cover with a feather through which you could see a vintage photo of a WWII-era city. I liked it, since much of the story takes place during WWII, and there is also a Native-American element and the feather conveyed some of that.

But after the first batch of ARCs (Advance Copies) were printed, my publisher changed her mind. She decided she wanted a more feminine cover. Also, right after that, a poet reviewer came up with the title: From Ashes Into Light. The change was subtle, but the title finally clicked.

At first I was skeptical the cover needed to change, because I liked the first cover. But then I saw what the publisher ultimately she came up with, probably the eighteenth version of the cover, and I was glad she changed it.

She did something fun too, which was post a poll on my Facebook page, letting my friends pick which direction to go with the cover. We got about thirty votes over 3 versions of the cover. Then from there, she did about five more versions to get the final cover we have now.

The final cover ended up using the same overhead picture of a WWII-era city, but instead of sepia, it was a mixture of rich purples and blues. Over that is a play of ash and dark and light, just the right element to add some mystery and connect readers to the title, From Ashes Into Light.

Some complaints we’ve had about the cover is that it looks contemporary and the book is historical fiction, but the subject matter of reincarnation is so radical and visionary. So ultimately I feel the publisher captured just the right blend of both.