The Pitchfork of Destiny by Jack Heckel 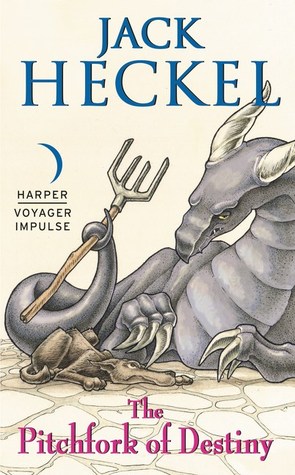 Life in the Kingdom of Royaume has been happily ever for King William Pickett and his fiancee, Lady Rapunzel. But when Volthraxus, the Great Dragon of the North, returns looking for the love of his life, the Great Wyrm of the South, it becomes clear that some fairy tales never end.

After Volthraxus discovers his love was slain by the newly crowned king, he seeks his revenge by kidnapping Rapunzel. Once again, Will teams up with Edward Charming, the only man in all the kingdom with the skill, ego, and dashing good looks to fight a dragon. Our heroes fates depend on finding a weapon re-forged in dragon blood the Pitchfork of Destiny.

But as the two set off after the dragon, Charming s bride, Lady Elizabeth, falls into the clutches of a mysterious sorcerer known as the Dracomancer, who has his own plans for Royaume."

Jack Heckel's life is an open book, actually, the book you are in all hope holding right now (and if you are not holding it, he would like to tell you it can be purchased from any of your finest purveyors of the written word). Beyond that, Jack aspires to be either a witty, urbane, world-traveller who lives on his vintage yacht, The Clever Double Entendre, or a geographically illiterate professor of literature who spends his non-writing time restoring an 18th century lighthouse off a remote part of the Vermont coastline. Whatever you want to believe of him, he is without doubt the author of the premier volume of the Charming novels, Once Upon a Rhyme. So, no matter what rumors you might hear about Jack, particularly those spread by either litigious dwarves or litigious dwarfs, ignore them, because he is currently working on a sequel. Because more than anything, Jack lives for his readers.

Despite whatever Jack may claim, in reality, Jack Heckel is the pen name for John Peck and Harry Heckel.