Book Review: ‘Luck Is Just the Beginning’ by Celeste Leon 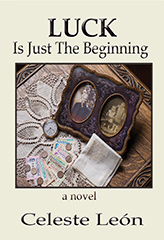 Based on a true story, Celeste Leon’s beautifully written debut novel is the story of a young man in 1940s Puerto Rico who wins the lottery, only to realize that, as the title states, luck is just the beginning.
Young Ramon is able to see visions, a gift he inherited from his mother. When he sees a number flash across the sky, he decides to buy a complete lottery ticket. At first, he’s thrilled to have won a fortune, for his plan is to go to college, become a dentist, and make the world a better place by helping the people of his village. But, as it turns out, money changes a lot of things—people’s intentions, expectations, desires—even one self’s, and not always for the better. Now, people approach Ramon because they want something from him, and he starts to doubt everyone, even the girl who claims to love him. Likewise, he starts doing things he later regrets.
This is the era of WWII, and in the midst of it all Ramon tries to face the challenges that threaten to destroy his life, especially a man whose envy has made Ramon his target for revenge. Overnight, all facets of Ramon’s life turn upside down—his dwindling family business, his relationship with Elsie, his dream to go to college in the States. At some point, even the police are after him.
The novel is rich with Puerto Rican flavor and historical details, and Leon writes with simplicity yet profound perception about human nature. Ramon is an endearing, utterly likable character—an honest, good-hearted man who makes mistakes yet rises above them.
Luck is Just the Beginning was honored with a Mariposa award for Best First Book in the 2016 International Latino Book Awards, and was also a finalist in the “Fiction: Multicultural” category of the 2016 International Book Awards.
Read my Blogcritics interview with the author.
Find out more about the book on Amazon or from the author’s website.
This review was originally published in Blogcritics Magazine.
Book Cover Junkie at 10:56 AM