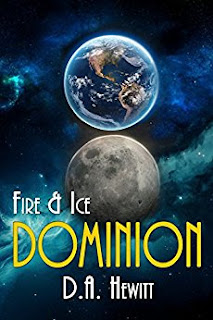 It’s the year 2075. Lunar mining and processing facilities have prospered near the lunar south pole, where the Moon’s largest city, Valhalla, rests on the rim of the Shackleton Crater.

Dominion Off-Earth Resources has beaten the competition into space and is ready to establish its monopoly with the opening of the orbiting space resort Dominion. But Pettit Space Industries has a secret plan to emerge as a major contender in the commercialization of space. The upstart company is training the first space rescue squad at a secluded off-grid site in Barrow, Alaska.

The rescue squad gets nearly more than it can handle when its first mission involves the Pope, who’s traveling to the Moon to establish the Lunar See. During the rescue attempt, they discover Earth is imperiled by an asteroid large enough to cause mass extinction. Using the unique skills taught during their training, skills emphasized by the great psychoanalyst Carl Jung, these Jungi Knights must elevate their game if they are to save both the Earth and the Pope—while not getting killed in the process.

The girl shook her head impatiently, the ponytail swaying back and forth. “You don’t recognize me?” she asked.
I looked closer. “I’m not up on the latest supermodel scene,” I told her, “and I haven’t seen many movies lately.”
“Supermodel? Movies? What on Earth are you talking about?”
“You seem to think I should recognize you. I assume you’re a model or an actress, someone who would be easily recognized.”
She whispered something under her breath, and having a modest ability to read lips, thought she’d said, What an idiot. “I’m Jessica Thibideau.”
I thought Julia was going to leap out of her chair and try to strangle the girl. I reached over and laid my hand on her forearm with as much reassurance as I could muster.
Julia reached over, grabbed the back of my neck, pulled my head down, leaned in, and whispered, “She runs the science departments in DOER’s space program. She’s the daughter of Benjamin Thibideau.”
“Oh,” I whispered. “Yes, of course I’ve heard of her. Never seen a picture, though. Why would she assume I’d recognize her?”
“Even in the Ural Mountains, I’ve seen news pics of the famous Jessica Thibideau. Her spaceship designs incorporate integrated shielding generators. She’s responsible for the explosion of industry in space.”
“And on the Moon,” I added. “Maybe I have seen her picture. She looks different in person.”
Jessica Thibideau began tapping her toe. “If you don’t mind, I have things to do.” She waved her arm in a wide sweeping movement. “And in case you haven’t noticed, we have a problem here.”
I began straightening myself but Julia grabbed my wrist. “Be careful,” she whispered. “Her company practically buried yours. Some say the stress is what killed your father.”
“Yeah, well, my dad worked too hard.”
I pulled away and straightened myself in my chair and folded my hands in front of me on the table. “Are you referring to the street music?”
She snorted. “Of course. What are you, some kind of joker?”
“Just trying to communicate.”
She reached up and pinched her nose, equalizing pressure. “You stole my asteroid retrieval drone.”
My reaction caught me by surprise. I jerked back as though jolted by a cattle prod such was my surprise at being accused of something so off my radar that she may very well have accused me of being an alien in disguise. “What?” I managed to eke out.
“You must’ve sanctioned it, at least. There are only two players in space—DOER and PSI. And DOER wouldn’t steal from itself.”
“Are you accusing me of something?”
“A DOER asteroid interceptor-collector drone has gone missing. Not only that, a dummy drone was left in its place to camouflage the theft. Now tell me, Mr. Pettit, how many companies have the capacity to handle what an interceptor-collector drone can deliver?”
I held up two fingers, eyebrows raised with uncertainty.
She stared as though trying to melt me with her glare. After a few moments, she made a sound that resembled harrumph and placed her hands on her hips. “Anibal Sanchez is your stooge, right?”
She throws out big tomatoes and observes your reaction.
I realized that this woman believed she possessed the skill to discern changes in blood pressure, eye dilation, and other change indicators that revealed when a person was lying.
Interesting.
“Never heard the name before,” I told her. “And now that I’ve answered your question, Miss Thibideau, I’ll tell you that you’re in no position to judge me. You don’t know me, and I doubt you have the depth of field to see clear enough for me to even want to have a conversation with you.”
“We all make judgments constantly,” she shot back. “You’re judging me right now.”
“You’re the one who barged in on us.”
She took a step to her left, then to her right. She placed her hand on her chin, opened her mouth, then finger-tapped the side of her head. She looked like a frenzied shopper who’d lost her shopping list and was trying to recall each item in the order in which they appeared.
She reached up and pinched her nose. Instead of finding it annoying, I found myself attracted to it.
Here, let me help …
Finally she stopped fidgeting and looked at me. “Mr. Pettit, allow me to apologize, please. I just got back from Valhalla, and I’ve got a bit of the jitters. I’m jumping at conclusions.”
“I hear jitters can be a common problem for space-goers,” I said. I reached over and nudged a chair away from the table. “Have a seat.”
Julia jabbed me with her elbow. I leaned over and whispered, “Let’s see how much information we can get.” Then I kissed her neck and this seemed to appease her.
Jessica Thibideau glanced back at her sedan. “All right. I am starving.” She sat and whispered a command that brought up a translucent eight-panel octagonal grid interface that encircled her.
Impressive. But where’s the projector? An implant? No—more likely embedded in clothing.
Signorina Thibideau twirled her finger and jabbed at one of the displays on the panel to her left. She glanced at me. “How’s the pizza here?”
“Out of this world,” I said, trying to suppress the corner of my mouth from rising slightly. I failed.
Jessica closed her eyes, sighed, then placed her order.
Julia leaned in and whispered, “She seems flighty to me.”
“Jitters is typically temporary.”
“Permanent jitters, in her case, if you ask me,” Julia commented. 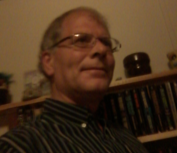 D.A. Hewitt is an award-winning author of four novels and over a hundred short stories. One novel was awarded a gold medal from the Independent Publishers Book Awards for best regional fiction. He attributes his success to hard work, honing a skill and providing an outlet for his passion for writing.

Born in Michigan, he lived for 25 years in North Carolina before returning to live in his home state. In addition to enjoying sky diving and mountain climbing, he is a proud veteran of the US Marine Corps and has earned a degree in mathematics.

Mr. Hewitt admits to a fascination with the work of Carl Jung and of the Gnostic religion. He’d always thought intertwining these topics in a science fiction novel was a stretch, but one day the storyline of Dominion came to him. He wrote the novel in a stream of consciousness. “It makes sense, tapping into the collective unconscious,” Mr. Hewitt says, “very much like Carl Jung might have predicted.”