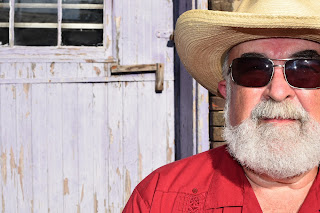 For more than 30 years, Jim Nesbitt roved the American Outback as a correspondent for newspapers and wire services in Alabama, Florida, Texas, Georgia, North Carolina, South Carolina and Washington, D.C. He chased hurricanes, earthquakes, plane wrecks, presidential candidates, wildfires, rodeo cowboys, ranchers, miners, loggers, farmers, migrant field hands, doctors, neo-Nazis and nuns with an eye for the telling detail and an ear for the voice of the people who give life to a story. He is a lapsed horseman, pilot, hunter and saloon sport with a keen appreciation for old guns, vintage cars and trucks, good cigars, aged whiskey and a well-told story. He now lives in Athens, Alabama and writes hard-boiled detective thrillers set in Texas.
Find out more about the book: www.amazon.com/author/jimnesbitt
Website: www.jimnesbitthardboiledbooks.com
Facebook author page: https://www.facebook.com/edearlburchbooks/
Blog: https://spottedmule.wordpress.com/
Interview:
Tell us about your book! What is it about and what inspired you to write it?
The Right Wrong Number is a hard-boiled tale of revenge and redemption set in Texas and northern Mexico. It’s more of a thriller than a whodunit and features Ed Earl Burch, a cashiered Dallas homicide detective eking out a living as a private eye. He’s an ex-jock gone to seed, a guy who’s been smacked around by life and has the bad knees, wounded liver and empty bank account to prove it. In this story, he’s been hired to protect an old flame threatened by the partners ripped off by her husband, a high-flying Houston financial consultant who has disappeared. These partners include some mobsters from New Orleans who send a pair of hitmen to get back their money, drugs and jewels and kill anybody involved in the score. Ed Earl finds himself in locked in a deadly contest where nobody can be trusted and he’s tempted to forget his own rules by the money and sex offered up by the old flame, who has a lethal knack for larceny and betrayal. When his best friend is killed in Dallas by hired muscle, Ed Earl blames himself and sets out for revenge that winds up being a bloody form of redemption.
Tell us about your publishing process. What was it like? Did you go indie or the traditional way?
I tried the traditional route, but ran into the typical roadblocks and shell games with agents who kept wanting me to turn my book into something it wasn’t—a pale version of the last book they successfully sold to a publisher. I knew my book was as good as what I saw on the market and decided to go the indie route and publish myself, using the Spotted Mule Press imprint.
How did you choose the title for your book? Did it come to you right away, before you started writing the story, or did it come later?
My novels are set in Texas, which was a land of second chances for guys like Sam Houston and William Travis. People who blew it badly elsewhere came to Texas to start over. Still do. My main character, Ed Earl Burch, is a guy who has burned up one too many second chances. So, the title of my first novel is The Last Second Chance. I knew the action in the next book would start with a phone call after midnight from one of his old flames, a treacherous woman named Savannah Crowe. Seemed appropriate to call this latest book The Right Wrong Number. I’ve even got a title for the third Ed Earl Burch book, The Best Lousy Choice. Sense a pattern here? 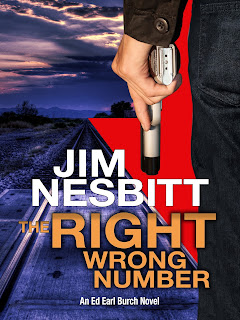 Tell us about the cover design process. Did you have a basic idea of what your book cover would be like?
I love the stark, arid beauty of West Texas and the border with northern Mexico so I wanted a cover that included a striking photo of that place, which is land that makes you feel like you’re looking at the bones of the earth. I found a wonderful photo by a guy named Andrew Palochko of the train tracks that run through Marathon, Texas with the jagged mountains in the distance and storm clouds with the waning sunlight of the day peaking through, giving it a nice tension between hope and menace. I knew I wanted big type and bold colors to create a look and feel for all my books. I think it’s important to have covers that not only catch the reader’s eye and are bold and unique, but that signal to the reader that here’s a Jim Nesbitt hard-boiled thriller, here’s an Ed Earl Burch novel. The covers of my first two books aren’t duplicative, but they use common elements that achieve the look I want.
Who is your cover designer and how did you find him/her?
The designer for my first book gave me four killer cover options and I planned to use one of his also-rans for the second book. However, he went AWOL on me—he just disappeared and wouldn’t respond to repeated attempts to contact him. This was very frustrating because I had a strong relationship with this designer and enjoyed the creative back and forth with him. I was really struggling to find another designer who could turn my vision into reality until an author buddy of mine, Owen Parr, suggested an outfit called SelfPubBookCovers.com. They’re an online broker for graphic artists. They hooked me up with a designer called Island. And then the magic happened.
How was your experience working with the designer?
An absolute delight. I can’t heap enough praise on Rob XXXX and his team at SelfPubBookCovers. The designer they set me up with, Island, understood exactly what I was looking for, didn’t object to my detailed instructions and really knocked it out of the park. They’re top flight professionals and responded quickly to e-mails, phone calls and requests for revisions.
What has been the readers’ response to your cover?
It’s been great. I’m getting strong, positive feedback from readers, reviewers and my trusted kitchen cabinet of fellow writers. I’ve got the shared look and feel I was gunning for and another strong cover that grabs the eye of potential readers of The Right Wrong Number.
What tips would you give to authors who are looking for a cover designer?
It’s a crapshoot because there are an awful lot of designers out there cranking out cookie-cutter covers that look either amateurish and scream ‘here’s a self-published book, don’t buy it’ or have the same templated look of everybody else’s book. You wrote your book and have the clearest and strongest knowledge of what it’s about. You’ve told your story your way the best you can. You owe it to yourself to have just as strong and clear an idea of what you want your cover to look like. Study the best selling books of your genre. Look at the reprinted books of the old masters. Find examples with a style and graphic elements that you think suitable for your book. And use those examples in your hunt for a graphic designer who will work with you and turn your vision into reality. Stick to your guns and don’t accept anything less.
Anything else you’d like to say about your book?