Margaret Fenton talks about the cover for 'Little Girl Gone' 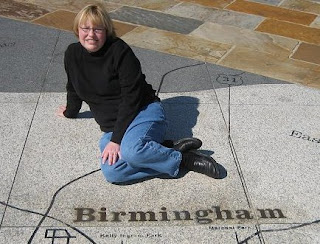 Margaret Fenton grew up on the Mississippi Gulf Coast and moved to Birmingham in 1996. She received her B.A. in English from the Newcomb College of Tulane University, and her Master of Social Work from Tulane. She spent nearly ten years as a child and family therapist for the Department of Human Resources before focusing on her writing. Hence, her work tends to reflect her interest in social causes and mental health, especially where kids are concerned.  She is the planning coordinator of Murder in the Magic City, a one-day, one-track annual mystery fan conference in Homewood, Alabama. She is President of the Birmingham Chapter of Sisters in Crime and a member of the Mystery Writers of America. Margaret lives in the Birmingham suburb of Hoover with her husband, a software developer.
Find out more on Amazon:
Little Lamb Lost (book one) / LittleGirl Gone (book two)
Connect with the author on the web:
www.margaretfenton.com
Facebook:  https://www.facebook.com/Margaret-Fenton-60189695222/?fref=hovercard
Interview:
Tell us about your book! What is it about and what inspired you to write it?
Claire Conover is back in Little Girl Gone, the sequel to Little Lamb Lost.  She has taken into custody a 13-year-old girl found sleeping behind a grocery store.  The girl’s murdered mother is found at a construction site owned by a family friend, then the girl disappears.  Her mother worked in an illegal gambling industry in Birmingham.  Things only get more complicated from there.  Is it possible the girl pulled the trigger?  She doesn’t have a lot of street smarts, so where could she have run? Claire has to find the answers, and the girl, fast.
I was inspired to write this novel after reading a newspaper article on teens and sexting.  Information is so immediate now, and I wonder how careful current teens are about what gets out there on the internet.  That was the basis for the story.
Tell us about your publishing process. What was it like? Did you go indie or the traditional way?
I got my contract with Oceanview when I attended Killer Nashville in 2007.  I highly recommend that conference for yet to be published authors (YTBP authors).  For a bit of extra money, you could talk to either an agent or a publisher.  I chose the agent.  Went to my meeting, sat down and gave her my mostly rehearsed pitch for Little Lamb Lost.  She hated it.  I don’t mean a little.  She HATED it in capital letters, and essentially said she didn’t understand why anyone would want to publish that.

So I went to the bar and ordered myself a large, extra large really, gin and tonic.  I was halfway through with it and a bit buzzed when my friend Don Bruns approached me and asked if I’d talked to Oceanview Publishing.  I explained what happened with the agent, and he said he was going to get the rep from Oceanview.  She came over, and I pitched, pretty sloppily.  She wanted to see it and about two months later I had a contract with Oceanview.  So my secret to getting published?  Gin.  Lots of gin.  By the way, Little Lamb Lost is an Amazon bestseller.
Then I wrote the second book in the series, Little Girl Gone.  Oceanview decided they were only publishing thrillers, and passed on it.  So I put it out myself through CreateSpace and Amazon.  I’ve been told I’m a “hybrid author”.  I can live with that. The third will be out hopefully by the end of the year.
How did you choose the title for your book? Did it come to you right away, before you started writing the story, or did it come later?
My titles always come to me first.  I knew after Little Lamb Lost I wanted to have a word that would be in all of the titles.  I love mysteries with that kind of hook, like Sue Grafton and Mary Daheim.  And Margaret Fenton’s Little mysteries were born! I think it kind of fits, since Claire works with little kids and all.  The third is titled Little White Lies. 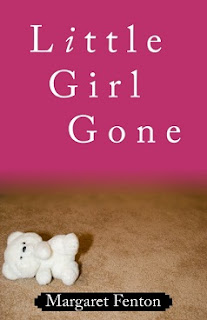 Tell us about the cover design process. Did you have a basic idea of what your book cover would be like?
Oceanview designed the cover for Little Lamb Lost, and I had input but not much—more like thumbs-up or thumbs-down.  I liked the cover.  For Little Girl Gone I kept some of the same features, like the font.  As a reader I love book giveaways!  For Little Lamb Lost I ordered a hundred little stuffed lambs and gave them away at Malice Domestic.  The white teddy bear on the cover is in Little Girl Gone, and I’ve given away a hundred stuffed bears for this book.
Who is your cover designer and how did you find him/her?
My cover designer is my brother, John Stephen Herring.  He has a fancy camera and a great computer and said he could do what I wanted.
How was your experience working with the designer?
I was great.  I love the cover to Little Girl Gone!
What has been the readers’ response to your cover?
I don’t know that anyone has really mentioned it, that I remember.
What tips would you give to authors who are looking for a cover designer?
Find someone you click with.  Have a basic idea of what you want.  You are going to be living with this cover for a long, long time.  I would also choose something you could replicate in a way if you are writing a series.
Anything else you’d like to say about your book?
My mysteries are very character-driven, and I hope everyone enjoys meeting Claire and crew.  I welcome feedback from readers at my website, www.margaretfenton.com.