The Feet Say Run by Daniel A. Blum 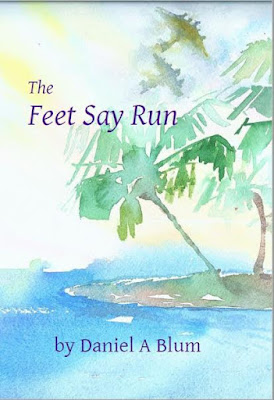 Title: THE FEET SAY RUN
Author: Daniel A. Blum
Publisher: Gabriel’s Horn Press
Pages: 349
Genre: Literary Fiction
At the age of eighty-five, Hans Jaeger finds himself a castaway among a group of survivors on a deserted island.  What is my particular crime?  he asks.   Why have I been chosen  for this fate?  And so he begins his extraordinary chronicle.

It would be an understatement to say he has lived a full life.  He has grown up in Nazi Germany and falls in love with Jewish girl.  He fights for the Germans on two continents, watches the Reich collapse spectacularly into occupation and starvation, and marries his former governess.  After the war he goes on wildflower expeditions in the Alps, finds solace among prostitutes while his wife lay in a coma, and marries a Brazilian chambermaid in order to receive a kidney from her.

By turns sardonic and tragic and surreal, Hans’s story is the story of all of the insanity, irony and horror of the modern world itself. 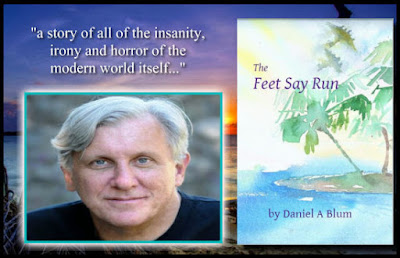 
It was early November.  November 5, to be exact.  1938.   I was with Hilda when we heard the news over the radio.  A German diplomat had been shot.  By a Jew.  We’d never heard of this diplomat.  Who had?  But suddenly it was all over the news.  This abominable act!  Committed not just by a Jew.  But, rather, by the Jews.  This high crime!  For a few days the diplomat clung to life.    But the fury of the official broadcasts was astonishing.  The demands for revenge.  And then, on the day I had marked for my next visit with Sylvia, this obscure diplomat, now elevated to the level of a great personage, died of his wounds—martyred himself for the cause of all of us violated Germans.

Hilda and I just looked at one another.
“I think you need to get her out now,” Hilda said.  And then, “If you’re going to do it.”
I nodded.
The wireless was broadcasting stories of rioting breaking out all over Germany.  Anti-Jewish rage.  Synagogues torched.  Storefronts smashed.  From inside Hilda’s apartment though, we heard nothing.  It was like any other night.  Would it really spread to our quiet little town?
I left for Sylvia’s before midnight.  The crooked alleys in Hilda’s neighborhood were all calm.  Maybe none of it was true.  There were people out here and there, maybe more than usual —groups of threes and fours, mostly drawn out by the news, wondering what they would see.  But it was a chilly night, and that seemed to keep people moving.
As I walked toward the river I could hear more voices.  And then there was something.  A lamp store.  Brodsky’s Lamps and Lampshades.  Smashed to ruins.  Shards of glass everywhere.  Just as the radio had described it.  Why had it happened here though?  What was this strange, magical connection between the radio and this pile of debris?   Is that what it means to be a social species, that we will simply do what we believe others are doing?  We hear words on the radio, people are destroying Jewish businesses, and like pre-programmed automatons, we interpret this message as an instruction?
I moved on, walked along old streets, under medieval arches, and out to the less ancient, less huddled part of town.  Across all of it was a sort of crystalline quiet.  A milkman’s wagon passed —the horse clopping and snorting.  Along the next block I scared up a yard of chickens, startled myself with the sudden clucking and scattering.  Peaceful Edelburg.  My storybook town.
I was most of the way to Sylvia’s when I approached something again.  A commotion.  I drew closer.   A crowd of figures, milling around a square, Vanderplatz.  Watching something.  Watching what?  There were voices.  Shouts.  I approached.   Peeked through a pair of shoulders.   A man was being pushed by several men.  They were shouting at him.  Trying to get him to push back.  He was older, had a frightened face, kept trying to back away, but there was always someone behind him, giving him another shove.  His hair was disheveled.  Beside them, on the ground, was a hat that had evidently been knocked off his head.  What did they want from him?
A woman, who seemed to be his wife, was restrained by two other men.  One had her arms.  The other had a hand in her hair.  She was crying, protesting.  She wore a heavy coat that bunched in the neck as they pried her arms back.  When she spoke, the hand in her hair drove her down lower, until at last she was on her knees, and drool was dripping from her mouth.  Now the man protested the woman’s treatment, begged on her behalf, and this resulted in a fist hitting his stomach.  He bent over, breathless, as other blows started to land on him.
What an unreal quality it had though.  This one little act.  This one droplet of cruelty amid the sea that seemed to be sweeping the country.  You could even sense a kind of self-consciousness among the perpetrators.  Acting out this bit of violence, getting themselves comfortable with it, acclimated to it, this act that they had heard was happening everywhere, trying this new thing out, yet having trouble identifying this old couple, these actual people, with the criminal Juden of the broadcasts.
And then, after the first blow, how much easier it seemed, the next punches coming so much more naturally, the hatred starting to feed on itself, the inner pleasure at inflicting pain.  Yes!  This was going to be a beautiful thing, this new violence!  It was just a question of adjusting to it.  That the victims were old and helpless, that there was nothing that they had actually done to deserve it that anyone could name—wasn’t that really part of the joy?  Wasn’t that liberating in some way?  Because if you could beat these people, punch their elderly faces and kick their sides, with all these others watching, doing nothing to stop it, didn’t that give you a kind of power, not merely over your victims, but over everybody, everything?  Could you not take it even farther, see how far it could go?
There were maybe only six or seven young men actually involved in tormenting this couple, and maybe sixty or seventy watching silently.  Many no doubt shocked, horrified, wishing it would stop.  But silent as an audience watching a performance in a theatre.  Silent as a group of schoolchildren watching a bully pick on someone smaller and weaker.  Each thinking maybe now someone should stop this.  It has gone on long enough.  Someone should intercede.  But who?  How?  Others just incorporating it.  Accepting it.  Who knew.
And then there was that awkward moment.  That end without an end—the victims just lying there bloodied.  The beating done.  Only there was no curtain to lower upon the scene.  And that lack of a proper ending seemed to reveal, even to the perpetrators, the pointlessness of what they had done.  Did they just walk away?  Bow to their audience?  What?  At last it occurred to one of them to spit on the couple.  And then the others recognized the virtue of this, and added their spit.  And their beads of spit landed like hateful, little exclamations points on their victims.  And thus having found a suitable denouement, they turned away, headed off, whooping, breaking into some Nazi song—as though it were the final number in a musical.
Kristallnacht had come to Edelburg.

For a while the crowd stayed where it was, looked on at those two heaps of suffering, as though still expecting something more to happen.  Wondering if it is over.  Wondering if they should offer assistance, call the police, deposit their own spit.  In the end though, they did none of these.  Instead they just watched for a while more and wandered off, left to sort out their own thoughts.
I was one of the last to leave.  I watched them stagger up.  Alive.  Moaning.  I briefly caught the man’s eye.  At least someone get him his hat, I thought.  But I didn’t.  I left.  Just as the others had.
Just a few more blocks to Sylvia’s, and now I felt even more urgently the need to reach her.  I was aware of forms passing this way and that.  More than would normally have been out at that hour.  I heard muffled voices.  But it was difficult to see very much.  The night was moonless.  Who were they?  It was hard to make out.
I waited across the street for a while, until it seemed there was nobody around.  Then I slipped around the back of Sylvia’s house and tossed a pebble at the window.   A moment later I was inside.  I was in her arms.  That same shocking nakedness through her nightgown.  Pressed against her.  We tiptoed up to her room, just as we had on my last visit.  I undressed.  Slipped into her bed.   At first I was still seeing that scene at Vanderplatz that I had witnessed.  That vignette.  And then in another instant it was gone.  As though a great wave came over consciousness itself, obliterating everything.  Because how could this beautiful sensation and that horrid memory coexist?  Or maybe I just willed it away.  I just wanted the pureness of the moment.  No past and no future.   No words.  Just the sensation, the great ocean-wave of desire, flooding everything.  So that when the bed creaked it was as though reality itself had given us a little nudge.  No, you cannot forget me.  I am right outside.  I am waiting for you. 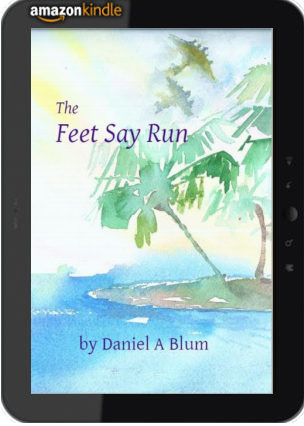 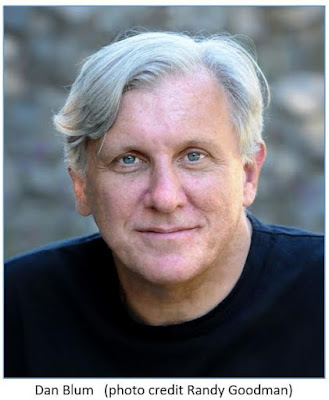 Daniel A. Blum grew up in New York, attended Brandeis University and currently lives outside of Boston with his family. His first novel Lisa33 was published by Viking in 2003. He has been featured in Poets and Writers magazine, Publisher’s Weekly and most recently, interviewed in Psychology Today.

Daniel writes a humor blog, The Rotting Post, that has developed a loyal following.

His latest release is the literary novel, The Feet Say Run.