Meet George A. Bernstein, Author of 'The Prom Dress Killer' 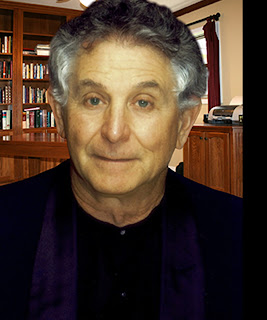 George A. Bernstein is the retired President of a Chicago appliance manufacturing company, now living in south Florida. Able to retire early and looking for something to do besides play golf, he leaned on a life-time flair for storytelling and turned to writing novels. He spent years attending writing seminars and conferences, learning to polish his work and developing a strong “voice.” Bernstein is acclaimed by his peers as a superb wordsmith.
His first novel, Trapped, was a winner in a small Indie publisher’s “Next Great American Novel” contest, and received high praise, gaining many mostly 5-star reviews at Amazon (reaching their “Top 100”) and Goodreads. His 2nd novel, A 3rd Time to Die (A paranormal Romantic Suspense) has also garnered mostly 5-Star & 4-Star reviews, with one reader likening him to the best, less “spooky” works of Dean Koontz & Stephen King.
Bernstein works with professional editors to ensure his novels meets his own rigorous standards, and all of his books are currently published by small indie press, GnD Publishing LLC, in which he has an interest.
The Prom Dress Killer is the third of his Detective Al Warner Suspense series, with the first, DEATH’S ANGEL, and the second, BORN TO DIE, already garnering rave reviews. Bernstein has the next Warner novel already in the works, to be published in 2017. Readers have likened Bernstein’s Detective Al Warner to Patterson’s Alex Cross.
Bernstein is also a “World-class” fly-fisherman, setting a baker’s dozen IGFA World Records, mostly on fly-rods, and has published Toothy Critters Love Flies, the complete book on fly-fishing for pike & musky.
Connect with Berstein on the web:
http://suspenseguy.com
http://amazon.com/author/georgeabernstein
http://facebook.com/georgeabernstein
Interview:
Tell us about your book! What is it about and what inspired you to write it?
The Prom Dress Killer is the third of my Detective Al Warner suspense novels. It was just a natural progression for the series, and I had this concept of a woman trying to stay alive by telling stories, much like Shahrazad, in The Thousand and One Nights. I wanted to continue the Warner series, and this was the next story.
Tell us about your publishing process. What was it like? Did you go indie or the traditional way?
In the beginning, I researched agents, wrote the best query letters I could … and fielded the form letter rejections, one after another. I attended writers’ conferences, pitched editors and agents, several of which some agreed to read Trapped, but still ultimately rejected it. However, I got some good feedback, rewrote the novel, removing a side plot that I loved after both an agent and an editor suggested it … and then fielded more rejections. Meanwhile, I began my next novel, and then miraculously, after only 20 years, Trapped was selected as “The Next Great American Novel” by TAG Publishers, a small traditional publisher, and went on to become an Amazon Top 100 novel, with loads of 5-Star reviews. Getting traditionally published takes unending preservation and a very thick skin. 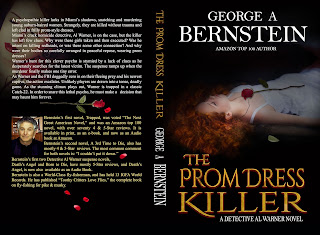 Now all my novels are published by GnD Publishing LLC, a small indie publisher.

How did you choose the title for your book? Did it come to you right away, before you started writing the story, or did it come later?
I had a working title while writing it, but really didn’t like it. The members of my small critique group brainstormed it, but in the end, it seemed obvious. The killer is leaving his victims all dolled up in senior-prom-type prom dresses. Hence, The Prom Dress Killer.
Tell us about the cover design process. Did you have a basic idea of what your book cover would be like?
Yes. Again the plot made it pretty obvious. It only required finding a reclining, auburn-haired young woman in a fancy dress. The designer added a rose for a nice touch. I think it’s perfect. The total cover design fits right in with my “Brand.”
Who is your cover designer and how did you find him/her?
Pandora Book Covers, in Australia. She was highly recommended to me by one of my critique partners. She was quick and good, and reasonably priced
How was your experience working with the designer?
Quite pleasant. She provided me with several links to search for the right photo, and produced everything as I requested. Small changes were executed quickly and without up-charges. I was provided everything publisher-ready for both print and e-books, plus several promotional banner designs
What has been the readers’ response to your cover?
So far everyone has loved it, and thinks it’s perfect for the novel.
What tips would you give to authors who are looking for a cover designer?
Ask for referrals from authors whose covers you admire. Ask the designer for references, and be sure to get a firm quote that covers all your needs: print, e-books, and promotional banners. Remember, printers like Createspace require the file in PDF, while Amazon Kindle likes it in JPG.
Anything else you’d like to say about your book?


I’m really happy with the finished product and am looking forward to Al Warner’s fans for comments. Readers have likened Warner to Patterson’s Alex Cross. This is a detective series that is character based, not a police procedural. I get a lot of comments from readers that they really like Al Warner.
Book Cover Junkie at 5:45 AM