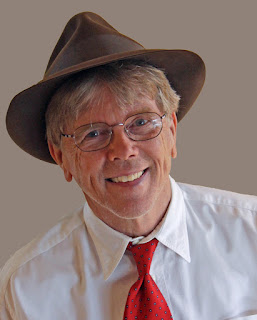 Mark S. Bacon began his career as a southern California newspaper police reporter, one of his crime stories becoming key evidence in a murder case that spanned decades.

After working for two newspapers, he moved to advertising and marketing when he became a copywriter for Knott’s Berry Farm, the large theme park down the freeway from Disneyland.  Experience working at Knott’s formed part of the inspiration for his creation of Nostalgia City theme park.

Before turning to fiction, Bacon wrote business books including  one for John Wiley & Sons Publishers that was printed in four languages and three editions, named best business book of the year by Library Journal, and selected by the Book of the Month Club and two other book clubs.  His articles have appeared in the Washington Post, Cleveland Plain Dealer, San Antonio Express News, Denver Post, and many other publications.  Most recently he was a correspondent for the San Francisco Chronicle.

Desert Kill Switch is the second book in the Nostalgia City mystery series that began with Death in Nostalgia City, an award winner at the 2015 San Francisco Book Festival.  The third book in the series will be published soon.
Bacon is the author of flash fiction mystery books including, Cops, Crooks and Other Stories in 100 Words.  He  taught journalism as a member of the adjunct faculty at Cal Poly University – Pomona, University of Redlands, and the University of Nevada - Reno.  He earned an MA in mass media from UNLV and a BA in journalism from Fresno State.
Find out more on Amazon
Website and social media:
www.baconsmysteries.com
Twitter: @baconauthor
Facebook: https://www.facebook.com/markbaconmysteries/
Google plus: https://plus.google.com/+MarkBaconwriter

Tell us about your book! What is it about and what inspired you to write it?
A life-and-death chase across the Nevada desert in August highlights the action in this complex mystery spread across the southwest. Desert Kill Switch takes place first in Nostalgia City, a massive (and pricy) theme park with a unique appeal—particularly for anyone who remembers the 1970s.  The Arizona park re-creates in minute detail, a small town from the 1970s.  It’s complete with period cars, clothes, food, music, shops, fads, hair styles, restaurants—the works.
The story begins in the desert just outside the park.  Lyle Deming, a park employee and ex-cop, finds a bullet-riddled body next to a pristine 1970s model Pontiac Firebird.  But when he returns to the scene with sheriff’s deputies, no car, no body.
At the same time, Kate Sorensen, the park’s vice president of public relations is in Reno, Nev., representing Nostalgia City at a rock ’n’ roll and classic car festival.  When she’s accused of murdering the festival’s president, Lyle joins her in Nevada and the two embark on a wild, puzzling ride to exonerate Kate, save a witness’s life, trap a blackmailer and find the missing corpse.  They travel from Nostalgia City to Reno to Las Vegas and back.
In addition to automobile kill switches, which I’ll explain in a moment, the book also looks at the classic car market.  This is not the sale of repainted jalopies, but of beautifully restored muscle cars from the ’60s and ’70s that can sell in the low to high six figures. And can be counterfeited.
Inspiration for Nostalgia City theme park comes from one of my jobs early in my career.  I was a copywriter for Knott’s Berry Farm, the large theme park just up the freeway from Disneyland.  As a mystery fan—but not a mystery writer yet—I thought that a theme park, especially at night, would make a great setting for a murder novel.  I used my behind-the-scenes theme park experiences to create the retro park, Nostalgia City. 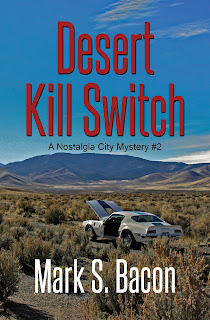 Tell us about your publishing process. What was it like? Did you go indie or the traditional way?
This is the second book in my Nostalgia City mystery series.  My publisher is Black Opal Books and I’m under contract for the third book in the series which will be out next year.  Although I self-published a how-to book once, I wanted to find a traditional publisher to carry this novel series.  It gives me more time to write, rather than be involved in every production task.
How did you choose the title for your book? Did it come to you right away, before you started writing the story, or did it come later?
This was a challenge.  You can’t copyright a book title, thus often more than one book has the same title.  Confusing.  At least six relatively recent mystery/suspense books have the title “Kill Switch.”  Obviously I didn’t want to make mine the seventh book with that title.  But since automobile kill switches are so important to the book, I had to look for other ways to use those words.
As the book is set in Arizona and Nevada, it takes place in the Mojave, Sonoran and Great Basin deserts.  I thought about using one of those desert names, but ultimately decided on the more simple, Desert Kill Switch.
Kill switches are devices that some auto dealers install in cars they sell.  Dealers sometimes put GPS trackers and kill switches in cars sold to people considered to be high-risk borrowers.  If a buyer misses a payment—sometimes by as little as a few days—the car is dead.  I discovered this practice in a news article, did follow-up research, and found out that about two million cars in the US contain remote-control kill switches.
Tell us about the cover design process. Did you have a basic idea of what your book cover would be like?
The credit for this stunning cover goes to its designer, Jacci Larsen and to James Mandas, the owner of the 1972 Pontiac Firebird Trans Am seen stranded in the desert.
My publisher permits authors to do their own covers and I had a pretty good idea what I wanted: a photo of a classic car surrounded by empty desert.  Since the book takes place in the desert, an arid landscape had to be part of the cover and the classic car trade would be represented by a good automotive example
Without spoiling too much of the plot, in the first chapter my protagonist, Lyle Deming, finds a Firebird on a lonely desert road.  The mystery—and the murder—proceeds from there.
To set up the picture, I needed to find a restored classic car from the 1960s or 1970s. I didn’t really care what make or model it was.   I first tried local car clubs and happened to find reference to a Pontiac owners club.  After about twenty minutes more searching I found pictures of the white and blue Firebird at an auto show and was able to contact Mandas, its owner.
He graciously agreed to haul his beautiful car out to the desert. After several postponements due to bad weather, the photo shoot took place about 25 miles north of Reno, Nevada on a chilly, November day.  The car is an immaculate automobile artifact and it reflected the desert sun as it posed for the photos.
The cover design has the photo flowing across the spine to the back cover.  One clever design element that Larsen added on the spine is a US highway sign with the numeral 2 in it to indicate this is the second book in the series. The first book had the same highway sign on the spine, except it said, Route 66, representing the historic “mother road.”  Nostalgia City theme park is located near a restored portion of 66.
Who is your cover designer and how did you find him/her?
Larsen is my daughter.  She’s a web designer, not a book designer by trade, but her sense of style and balance translates well to all media.  She did the design for my first book and has helped with designs on my website and printed promotional material.
How was your experience working with the designer?
Excellent.  I appreciated she treated me as much like a client as her father.  She worked with deadlines, gave me updates on the work in progress and was open to suggestions.
What has been the readers’ response to your cover?
So far, so good.  The book has just come out so I’m waiting for more feedback.  I posted the cover on social media recently and several people wanted to read the book, just based on the cover.
What tips would you give to authors who are looking for a cover designer?
Look at lots of samples. If a designer has not done many book covers, but has an extensive professional portfolio, study the work.
Look at the covers of top-selling books in your genre.  See if you can spot trends.  If you’re a romance writer and the artist you’re considering has mostly designed high tech books, tell him or her to study your genre. Also, talk with other authors.  Ask them who designed their covers.  How much did it cost?
Anything else you’d like to say about your book?
The landscapes in Arizona and Nevada have many faces.  The bare, dark hills and tan and green scrub brush on my cover reflect the open spaces—and the daunting isolation—of the southwest deserts.