"The Cover of The Guardian," by Anna del Mar 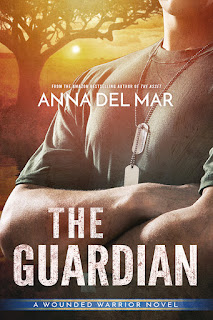 So I went to Africa. I wanted to see the wildlife, of course, to photograph some of the world’s most iconic animals in their natural habit. I also wanted to explore the African connection to my Caribbean-forged heritage. I expected I’d be wowed in every way and I was. In particular, I was taken by the diverse people of Tanzania who extended me such warm hospitality. It was an amazing trip.

What I didn’t expect was the story that came out of my trip to Africa. I was a visitor in this wonderful continent and mine was supposed to be a no-writing vacation. But days, weeks, and months after I left, Africa stayed with me. It’d seeped into my blood, captured my imagination, and it wouldn’t let go until I sat down and put down the story that would eventually become The Guardian.

Following in the vein of The Asset and The Stranger, The Guardian is the third standalone story of my Wounded Warrior series. The story goes something like this: Ex-SEAL turned game warden, Matthias Hawking is engaged in a fierce battle to end poaching in Africa, but when a beautiful journalist defies the poachers, he will do everything in his power to protect the woman who has captured his heart.

The range and scope of Africa defies the eye and the imagination. To settle on one single image that summarizes the beauty and depth of such a wondrous place is impossible. But I think that Mayhem Cover Creations succeeded when they designed the cover for The Guardian. They asked me: What’s the single, most important element that we want to convey?

The light, I said, because the light in the Serengeti is striking, rich with a variety of yellows, and oranges and reds I’ve never seen anywhere else, dazzling to the eye but also to the mood of the place. It’s also essential to the survival of the species that make their home in the African plains, including the humans that live, work, and play there.

I shared my pictures with Mayhem, the ones I’d taken at dawn and dusk, when the Serengeti comes alive with creatures large and small. I also borrowed sample images of much better photographers than I could ever be. And then I described the scrumptious Matthias Hawking in detail, not only physically, but the concept of him, his strength, his dedication, his commitment to conservation in Africa and to justice in the world. And thus The Guardian’s cover was born, aspirational in every way to the stunning continent that birthed the story.

PS: Would you like to see the images that inspired many of the pivotal scenes in The Guardian? Click here to see my pictures of Africa.

Amazon Bestselling author Anna del Mar writes hot, smart romances that soothe the soul, challenge the mind, and satisfy the heart. Her stories focus on strong heroines struggling to find their place in the world and the brave, sexy, kickass heroes who defy their limits to protect the women they love. A Georgetown University graduate, Anna enjoys traveling, hiking, skiing, and the sea. Writing is her addiction, her drug of choice, and what she wants to do all the time. The extraordinary men and women she met during her years as a Navy wife inspire the fabulous heroes and heroines at the center of her stories. When she stays put—which doesn’t happen very often—she splits her time between Colorado and Florida, where she lives with her indulgent husband and a very opinionated cat.

Anna loves to hear from her readers. Connect with Anna at:
Annadelmar.com
Anna on Facebook
Anna on Twitter
Anna@annadelmar.com
Subscribe to Anna’s newsletter
Buy Links for The Guardian:
Amazon:
https://www.amazon.com/Guardian-Wounded-Warrior-Novel-Book-ebook/dp/B0731RKCP5/ref=sr_1_4?ie=UTF8&qid=1498164070&sr=8-4&keywords=anna+del+mar