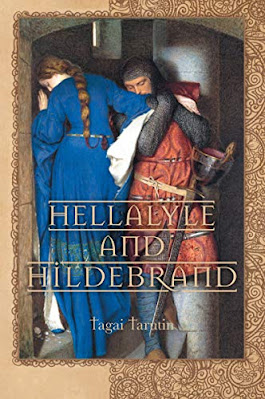 Hellalyle and Hildebrand, were drawn into a relationship engineered by those same unseen forces who had selected her bodyguard; their purpose, to thwart the devil, incarnate in Prinz Paulus, in its attempts to kill the princess.

A downs-syndrome girl of mysterious origins, named Ethla, emerges out of the wildwood. She is taken care of by Princess Hellalyle. and plays a crucial part in the narrative.

The king, while away, learns of the developing relationship between his daughter and the leader of her bodyguard, and feels betrayed by the English knight, and so dispatches his champions – his seven sons, and Paulus – to arrest, and execute Hildebrand, and confine Hellalyle until the king`s return.

The eleven, remaining protectors of the princess, leave the kingdom, believing their contract has been nullified by Thorstiens edict, leaving Hildebrand alone to face Hellalyle`s brothers and step-brother. The Englishman takes the fight to his adversaries, and slaughters all the unfortunate siblings of the princess, except Paulus, who after surrendering to Hildebrand, turns about and treacherously kills him, and then brutally, incarcerates his step-sister.

As these occurrences were unfolding, in another part of the continent, one of her bodyguards, the Teutonic knight, Karl von Altenburg, now living in a monastic order, experiences a vision, informing him of Hellalyle`s plight, and sets out to for Castle Preben.

Meanwhile, in her prison, Hellalyle gives birth to Hildebrand`s son, now sole heir, whom she names Hagen. On a fateful day, Ethla, at the princess’s urging, flees into the wilderness, taking to safety, the infant crown prince, to save him from Prinz Paulus, who, feeling outwitted mortally wounds the princess in revenge.

“A beautiful love story of a medieval knight and a noble princess written by Tagai Tarutin. The book allows us to go back in history and hear more about the exploits of the legendary Hildebrand and his beloved Hellalyle. The book is full of picturesque scenes of the events in Medieval Europe and it gives us the opportunity to immerse in the spirit of those times. It will be a good read for those interested in history, literature and romance…” – Alexandra Suyazova, Teaching Fellow of English, Saint Petersburg, Russia

“A fabulous story that could be easily transformed into a screen version, about a truly romantic relationship beyond any prejudice, driven by pure intentions at the times when the chivalry and nobleness made the difference in survival of a human life.” – Anatoly Leonidovich Rasputin, graduate in English from the University of Linguistics, Nizhny Novgorod, Russia.

In the great hall, Hellalyle, on hearing the news that her brothers were coming to arrest Hildebrand, pleaded with him to leave. “Hildebrand, you must leave – my father has dispatched my brothers to seize you. Our relationship has set in motion a fait accompli, and now your life is in great danger.”

However, Hildebrand, staring into the fire, was in no mood to listen to her pleading, saying, “Whatever the other knights decide to do, I cannot in all consciousness allow myself to abandon you to an uncertain fate, as I feel responsible for this dire situation.”

Hellalyle, in desperation, pleaded, “Will you, please, be sensible! You cannot defeat eight armed men! Remember, these are my brothers, and at the end of the fight you will lie dead, and so will most of my brethren, and for what end? My family destroyed, and

Prince Hildebrand ignominiously buried in a foreign field, which will be a tragedy for the English nation, and it will not end there, as I feel further calamity awaits those remaining at this fortress.”

“Fate must run its course!” exclaimed the defiant knight, raising his voice. “If you think I will deliver you into the hands of Paulus, you gravely underestimate me. No greater evil walks the land, and he will surely die on the blade of my sword! As for my remains lying beneath the woodland floor, that holds no fear for me, as you have introduced this knight to the beauty of nature, and honour awaits if wild creatures should walk across my grave!”

The soldier’s expose of his inner self prompted Hellalyle to gently grasp his forearm, in a gesture of empathy to his plight, with a pained expression etched on her face. The other bodyguards met to decide on what action to take considering the king’s command, knowing that they must not obstruct. All – save one – agreed that they should depart, convinced their contract with the monarch was severed by these unfortunate events. Von Altenburg, at first, declined to abandon his friend. He was fearful for the safety of the princess, but he eventually conceded, opting to join his comrades in arms.

News of their impending departure reached Hellalyle, who decided to visit them. In a fractured voice, she addressed the company.

“Honoured knights, whom I might almost regard as my brothers and such gallant men, warriors of the Christian church…my heart is about to break. I stand here now imploring you to persuade Hildebrand to leave at once with his fraternal fighters, for if he were to stay, I fear that some tragedy may befall him and my family.”

Her impassioned speech prompted the knight von Streitz to say, “He appears to be deaf to our pleading, Your Highness! What more can we do to sway him?”

Hellalyle, almost in despair, raised her hands to her face and burst into tears. All eleven knights, embarrassed, kept their eyes fixed on the ground before stealing past her prostrate figure, anxious to avoid an uncomfortable situation.

As they rode from the castle, von Altenburg lingered to pay one last visit to Hellalyle and Hildebrand. Entering a chamber, he observed them by the window, Hildebrand pacing up and down, stabbing the floor with his sword, in apparent frustration, the princess standing in sombre contemplation of the densely wooded prospect below. They were all alone as she had sent her staff to the safety of the kitchens. As they turned to face him, von Altenburg became struck by their dramatically altered demeanour. The once-resolute Prince of England now despondent and downcast; and Hellalyle, her face once so radiant now shut down, her eyes that brightly sparkled now eclipsed. She appeared almost lifeless. 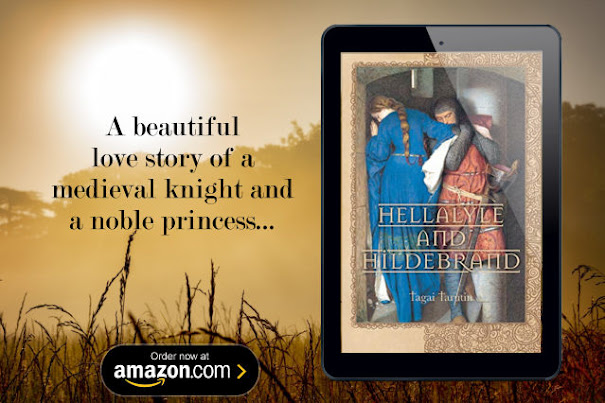 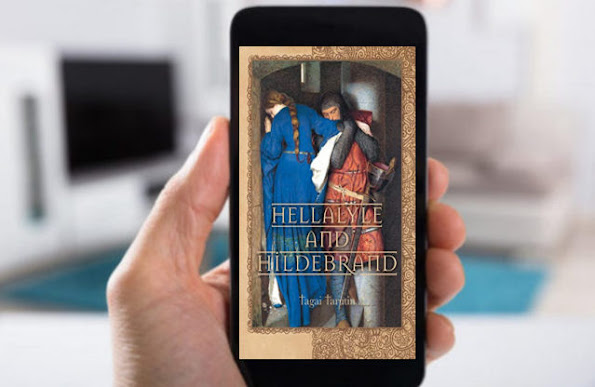 There are two others of a completely different genre, that lie unfinished, awaiting inspiration.

He has worked most of his life in sales but has always had an interest in Arts and Humanities. Things that are beautiful and appealing play an essential part in his imagination.

Besides travelling in West Europe, he has journeyed to the far South Atlantic, and European Russia, anxious to see parts of the world that are for many mystical destinations on a historical map.