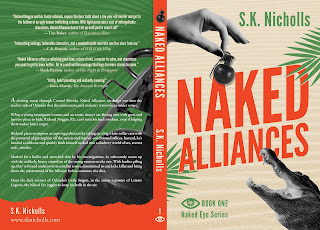 Thank you for having us at Book Cover Junkie today. The cover for Naked Alliances was created by Marlon Joshua Namoro who is Saturn9 at the company 99Designs. He’s a platinum level designer with them and they are an online graphic design marketplace headquartered in San Francisco with offices in Melbourne, Berlin, Paris, London and Rio de Janeiro. Saturn9 works out of the Philippines.

The process at 99Designs is a very well laid out contest. You post a request for designers, listing information about your story that you feel might be helpful, and designers respond to your request with options. I titled my request: Regional Florida Crime Thriller with Humorous Undertones.

Initially, I was perplexed by the number of hardcore photographic covers I received in response. It must be as challenging to design humor in a cover as it is to write humor into a crime story, but several designers stepped up the plate to turn the corner. Some turned too hard to downright cartoonish, so I had to reconsider my word choices in descriptions.

You are able to go back and forth with dialog and images with each designer to narrow down specifics, or speak to your group of designers as a whole.

When I had about a dozen covers to choose from, I was able to hold a poll, involving my reader audience on social media. The covers were laid out in tiles and the audience could rate them all and put comments by each one. That offered really good feedback to consider.

It was a difficult choice between a few of them, but I didn’t want faces or character images on my cover. I like for the readers to be able to formulate images of people from my words rather than having a visual image imposed on them.

Once we narrowed down to a couple of covers, I held another poll, and selected the one that best suited the story with a more minimalist cover. Another consideration was how well the cover images looked in thumbnails. I had some really good covers that showed a lot more detail about the story, but seeing them in the tiny thumbnail displays like most retail platforms use made a huge impact on my choice.

The contest winner gets paid a flat fee, or you can award two winners, like I did, if you can’t decide…then you are free to choose later. The contest is only two weeks long, but designers will work with you afterwards to tweak any finishing touches that need to be applied. For example, my cover artist had used a crocodile on the cover image. My husband immediately picked up on the fact that it was not an alligator, and we don’t have crocodiles in the wild in Florida. Knowing my audience well, I knew someone else out there might take issue with that, so Saturn9 worked hard to find another image of an alligator in a similar pose. He also added the palm fronds for a touch of additional color without destroying the minimalist feel of the cover.

They are all well-versed at 99Designs in the specifications required for the self-publishing platforms available. You can see examples of each artist’s work when they respond to you or you can browse the site for someone who produced something similar to what you are looking for. I was impressed with Marlon’s ability to create several different styles of covers quickly. His creativity was amazing.

Saturn9 was willing to go a step beyond and create a nice logo for the Naked Eye Series. I would highly recommend him and the 99Designs company. It was a most affordable way to get a variety of cover ideas in front of me quickly.

Hint: The higher award you are willing to pay, the more attention you’ll garner and more choices you’ll have. Some people claim that you get the better designers with a higher award, but Saturn9 was with me from the start of the contest and I did not see any significant increase in the quality of work by raising the award.

When a young immigrant woman and an exotic dancer are forced to flee men with guns and have no place to hide, Richard Noggin, P.I., can’t turn his back—even if helping out makes him a target. Richard plans to impress an aspiring politician by taking on a big white-collar case that could take him from the streets to an air-conditioned office. Instead, he's handed a cold case and quickly finds himself sucked into a shadowy world of sex, secrets and…murder. Marked for a bullet and stretched thin by his investigations, Richard reluctantly teams up with the unlikely, brassy custodian of the young woman on the run. With bodies piling up, Richard and his companion are forced to go undercover in a most unlikely locale: the Leisure Lagoon, a nudist resort.  Going undercover in this instance will mean going uncovered…but lives are at stake—and this Naked Eye will have to juggle to keep his balls in the air and connect the dots before anyone else is murdered. As his pulse-quickening quest for answers leads from the dark corners of Orlando’s Little Saigon to the sunny exposure of the Leisure Lagoon, Richard will be put to the test. Just how much will this Naked Eye have to bear…or bare? The heat is on in this quirky Sunshine State crime thriller. 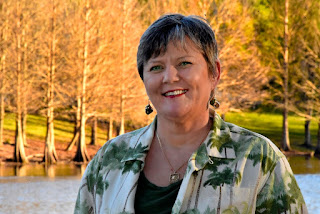 About the Author: S.K. Nicholls’ family owns and operates one of the oldest and largest nudist resorts in the nation located in Central Florida, Cypress Cove. Her experience gives her a deep understanding of the lifestyle choice and how it is extremely different from the sex industry, yet harbors clandestine elements of intrigue and fascination. Social issues are at the forefront of her writing. A former sexual assault nurse examiner, she has a special interest in the subject matter of sex-trafficking. A native of Georgia, she lives in Orlando, Florida with her husband, Greg.