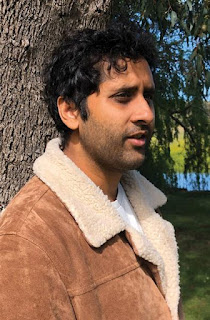 Kiran Bhat was born in Jonesboro, Georgia to parents from villages in Dakshina Kannada, India. An avid world traveler, polyglot, and digital nomad, he has currently traveled to more than 130 countries, lived in 18 different places, and speaks 12 languages. He currently lives in Melbourne, Australia.

we, of the forsaken world... came to me in 2011, when I was on a bus between Dubrovnik and Zagreb. A tall, brunette woman with a lingering stare sat down next to me on one of the stops. We began to talk about a host of things I can’t remember now, but the one thing that she told me which did remain in my head was the following: Croatia is one of the poorest countries in the world. Something about that sentence inspired my imagination. After we reached the bus station, I had to sit on one of the metal benches for a few hours, and write. I was starting to imagine different countries, completely imagined in my head. One was a half-rich half poor megalopolis, the sort found in most third-world countries. Then, there was a town that wasn’t so different looking from my grandmother’s place, the southern Indian city of Mysore. There was a tribe in the middle of nowhere, not to mention a town of great touristic importance, destroyed by an industrial spill. I also imagined hundreds of voices. Though, over the course of time, those two hundred-so voices became around sixteen; the most distinct and boisterous of the lot.

The tale of how I got published is equally as much of a complicated one. I had finished the book in 2016. One of my friends, who was an editor at a small press in New York, gave me a list of agents to contact. Most of them responded stealthily and quickly, but after some months, they did not find my book – experimental, ambitious, overtly literary – to be a quick fit for the market. They had to turn it down. After about a year of waiting for these agents to respond, I started submitting to small presses. It was in 2019 that I got a response from an editor at Iguana Books. They were interested in publishing the book. I told them that I was still waiting for some other publishers to respond, so I asked them to wait for some weeks so that I could get some responses. Within two weeks, this same editor emailed me, asking me to follow up. He really liked this book and wanted to publish it.   Before my work with Iguana Books, I hadn’t had a publisher respond to me so positively. Admittedly, Iguana Books is a hybrid press. This means that they vet every book project that they take on, but they ask the author to take on the financial burdens of publication. This still did not mean that they had to care so much about my writing. They did a lot of work, from the editorial stages, to the design of the cover, and the maps that I asked to have tailored onto the book itself, to make sure that the book was aesthetically enriched. They spent a lot of time with me talking on the phone, making sure all of my needs were met, from last-minute changes to a sentence or two, to having my books flown to Hong Kong or Delhi for the sake of book festivals. I do not think having been published by a hybrid press has downgraded the quality of my work in any way; if anything, I am glad to have had people who believe as fondly in my vision as I do. It makes me look forward to later publications, as well as the future of my career.

we, of the forsaken world... is a rightful perversion of the phrase we are the poorest country of the world... I felt that the former title lacked grace, and damned the so-called ‘poor countries’ as something static, submissive. we, of the forsaken world... gives a Biblical and Classical touch to the same concept; and it also gives a lot more space for the ‘forsaken world’ to speak back. What does it mean to be a ‘we’ or a multitude of the part of the world that the rest ignores? What does it mean to be ‘forsaken?’ Is it something that is chosen by that part of the world, or something to be resisted? These are the sorts of questions the title asks; a good state of mind to be in, as one opens the first pages of the book.

Yes. When I imagined we, of the forsaken world... I thought of it as a chorus of voices, from different corners of the planet, uniting to tell a tale of global abandonment; a collective protest, if you will. I wanted this multiplicity to be reflected in the cover. I wanted to see hundreds of invisible hands, almost like the broadbands connecting the world to the Internet, sticking themselves out, and reaching for another person in another corner of the world, to join them in their grievance. Unfortunately, though my cover designer tried, this concept was a little too hard to represent in a picture. We eventually settled for something that was a lot subtler, and did the concept equally as well.

My cover designer – as well as map designer – is Kyle Poirier, and he was found by my publisher.

It was hard simply because I lived in Australia, and he lived in Canada, and we both had to work on multiple things at once, which the time zone difference certainly made harder. But, he worked really hard, and whenever I told him something of his drawings wasn’t working for me, he was quick to respond. I really appreciated his work ethic and zeal.

For anyone who likes experimental, literary writing, with globalizing intent, please take the time to look at my book.

The Internet has connected – and continues to connect – billions of people around the world, sometimes in surprising ways. In his sprawling new novel, we of the forsaken world, author Kiran 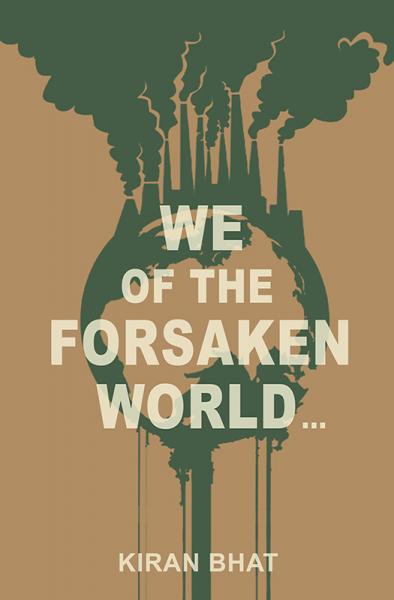 Bhat has turned the fact of that once-unimaginable connectivity into a metaphor for life itself.
In, we of the forsaken world, Bhat follows the fortunes of 16 people who live in four distinct places on the planet. The gripping stories include those of a man’s journey to the birthplace of his mother, a tourist town destroyed by an industrial spill; a chief’s second son born in a nameless remote tribe, creating a scramble for succession as their jungles are destroyed by loggers; a homeless, one-armed woman living in a sprawling metropolis who sets out to take revenge on the men who trafficked her; and a milkmaid in a small village of shanty shacks connected only by a mud and concrete road who watches the girls she calls friends destroy her reputation.

Like modern communication networks, the stories in , we of the forsaken world connect along subtle lines, dispersing at the moments where another story is about to take place. Each story is a parable unto itself, but the tales also expand to engulf the lives of everyone who lives on planet Earth, at every second, everywhere.

As Bhat notes, his characters “largely live their own lives, deal with their own problems, and exist independently of the fact that they inhabit the same space. This becomes a parable of globalization, but in a literary text.”

“These are stories that could be directly ripped from our headlines. I think each of these stories is very much its own vignette, and each of these vignettes gives a lot of insight into human nature, as a whole.”

we of the forsaken world takes pride of place next to such notable literary works as David Mitchell’s CLOUD ATLAS, a finalist for the prestigious Man Booker Prize for 2004, and Mohsin Hamid’s EXIT WEST, which was listed by the New York Times as one of its Best Books of 2017.