On May 2, 1970, a DC-9 jet departed New York’s JFK international airport en route to the tropical island of St. Maarten. The flight ended four hours and thirty-four minutes later in the shark-infested waters of the Caribbean. The subsequent rescue of survivors involved the Coast Guard, Navy, and Marines. In this gripping account of that fateful day, author Emilio Corsetti puts the reader inside the cabin, the cockpit, and the rescue helicopters as the crews struggle against the weather to rescue the survivors who have only their life vests and a lone escape chute to keep them afloat. 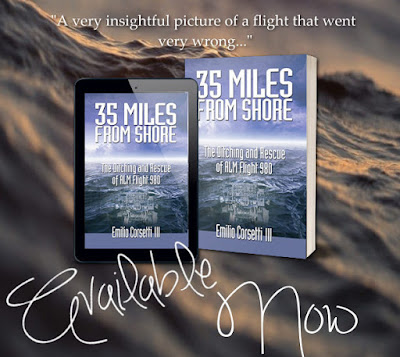 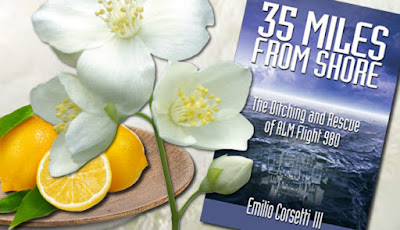 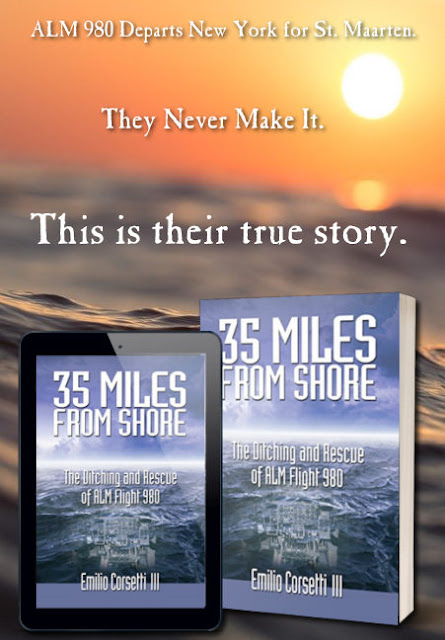 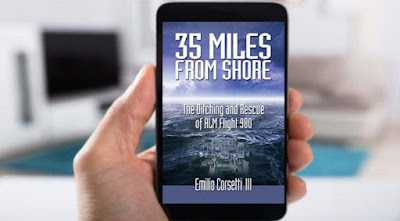 Prologue
Thirty-five miles off the coast of St. Croix, sitting beneath some five thousand feet of water, lies the most unlikely of wrecks. It is not the wreck of an ocean liner or a Spanish galleon or a fishing boat caught in an unexpected storm. This wreck is that of a passenger jet. The exact condition of the aircraft is unknown. It has remained unseen in the dark depths of the Caribbean Sea for more than thirty years. What is known is the condition of the aircraft before it sank.

The plane remained afloat and intact for at least five to ten minutes. The galley door and two of the four overwing exits had been opened. There was a hole in the forward cargo compartment large enough to allow several aircraft tires to float free. Witnesses reported watching the plane bank to the right then sink nose first. From there, it would have continued its mile-long dive until finally hitting the sea bed.

No attempts have ever been made to recover the aircraft or any of the flight recorders. The cost of recovery simply outweighs the value of what might be retrieved. Treasure seekers might find a few items of interest. There is a blue suitcase discarded by one passenger who claims that the suitcase contained over $135,000 in jewelry. Another passenger claims to have left behind a briefcase containing several hundred thousand dollars in cash. The veracity of these claims has yet to be proved or disproved. Little else of value remains inside the fuselage: a few purses, reading glasses, a wine bottle. There are four twenty-five-man life rafts still secured inside the large bins mounted in the ceiling. Somewhere in the debris inside the cabin are two cameras containing rolls of undeveloped film that captured the last moments of the ill-fated flight. There is something else inside, however, of great importance to a number of people – clues to what might have happened to those who didn’t make it out.

The date is May 2, 1970. Low on fuel and flying just hundreds of feet above the ocean’s surface, the crew of ALM 980 look out their cockpit window and see a turbulent sea swirling beneath them. Ten- to fifteen-foot swells rise and fall in all directions. The sky above is equally turbulent with heavy rain and low visibility. Back in the cabin the passengers don their life vests, for they have been told to prepare for a possible ditching. They are obviously concerned, but most consider it nothing more than a precaution. A few passengers refuse to put on their life vests, considering it an unnecessary inconvenience. Assisting in the cabin is a purser, a steward, and one stewardess. The stewardess strolls through the cabin helping passengers with their cumbersome life jackets. In the front of the cabin, in the galley area just behind the cockpit, the purser, the steward, and a third cockpit crewmember, a navigator, struggle with one of the five life rafts aboard. No one pays much attention to the four life rafts located in the bins mounted in the ceiling just above the four overwing exits.

The lack of concern displayed in the back of the aircraft is not shared by the two men in the cockpit. Their eyes are glued to the digital fuel totalizer, which indicates a figure so low that the number is unreliable. Both men know they are only seconds away from losing both engines due to fuel starvation. When the engines finally do quit, there are only seconds left in which to act. The captain flicks the seatbelt and no smoking signs off and on to signal the cabin crew of the impending impact; he doesn’t use the PA system because it’s not working.
Some of the passengers stand as they put on their life vests. Others sit with their seatbelts unfastened. No one notices the seatbelt and no smoking signs flicker off and on. Nor do they hear the bells that accompany these signs. Even if they had noticed, it wouldn’t make much difference. The cabin crew was trained by a different airline, one that didn’t use bells to signal an emergency landing. A few people look outside their window and note how close they are to the water. One man sitting near an emergency overwing exit looks around at his fellow passengers; most have no idea that they are just moments away from impact. In the forward section of the cabin, two men stand in the aisle snapping pictures. They are not wearing life jackets. There are shouts from the front of the cabin for everyone to sit down. But the aircraft strikes the water before everyone can take their seats.

Accident investigators often use the term “error chain” when explaining how accidents occur. They know from experience garnered from decades of accident investigations that accidents don’t occur in a vacuum. Accidents are usually the end result of a series of mistakes or events. Remove one of the proceeding events, or links in the error chain, and the accident does not occur. While we can never totally eliminate errors, we can strive to not repeat them. When I first contacted the captain of the flight, Balsey DeWitt, to inform him of my intention to tell this story, he was reluctant to participate. He finally agreed to be interviewed because he felt that by doing so he might help prevent a similar accident from occurring again, or at least increase the chances of survival should another plane succumb to a similar fate. In the numerous times that I have spoken with the former captain, he has not once shifted blame to another individual. He accepts full responsibility for what took place. But the mistakes he admits to are not the only links in the error chain that led to the ditching of ALM 980. 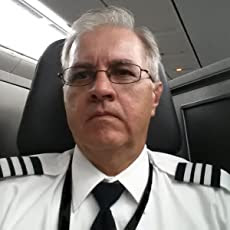 Emilio Corsetti III is a professional pilot and author. Emilio has written for both regional and national publications including the Chicago Tribune, Multimedia Producer, and Professional Pilot magazine. Emilio’s first book 35 Miles From Shore: The Ditching and Rescue of ALM Flight 980 tells the true story of an airline ditching in the Caribbean Sea and the efforts to rescue those who survived. Emilio’s latest release Scapegoat: A Flight Crew’s Journey from Heroes to Villains to Redemption tells the true story of an airline crew wrongly blamed for causing a near-fatal accident and the captain’s decades-long battle to clear his name. Emilio is a graduate of St. Louis University. He and his wife Lynn reside in Dallas, TX.