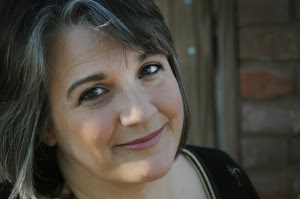 Rachael Miles writes ‘cozily scrumptious’ historical romances set in the British Regency. Her books have been positively reviewed by Kirkus, Publishers Weekly, and Booklist, which praised her ‘impeccably researched and beautifully crafted’ novels, comparing her works to those of Jo Beverly and Mary Jo Putney. Her novel, Reckless in Red, won first place in adult fiction: novels in the National Federation of Press Women’s writing contest. A native Texan, Miles is a former professor of book history and nineteenth-century literature. She lives in upstate New York with her indulgent husband, three rescued dogs, and all the squirrels, chipmunks, and deer who eat at her bird feeders.

Reckless in Red tells the story of Lena Frost, a woman artist who is about to make a big splash in the London art scene of 1820, when her partner runs off with the money she needs to open the exhibit. He leaves her a one-word note that says “run!”, and soon after a handsome stranger shows up, asking all sorts of questions that Lena can’t afford to answer.

I was fascinated by the nineteenth-century craze for panoramic paintings. The paintings were monumental, rising two or three stories high, typically hung in the round, and housed in buildings purpose-built for them. The experience was immersive--viewers were led into the exhibition room from a darkened corridor, so that when they entered the space, they would feel transported to another time and place. The most famous London panorama was actually housed off of Leicester Square, and I made Lena its proprietor.

Reckless in Red—and all the other books in the Muses’ Salon series—are traditionally published with Kensington for their Zebra imprint. As for the process… can something be exhilarating and overwhelming at the same time?

My first three novels and two novellas were all ings — Jilting the Duke, Chasing the Heiress, Tempting the Earl, Charming Ophelia…then I ran out of ings for the second Ophelia novella, which ended up dreadfully titled Enchanting Ophelia. So, I never wanted to see another ing verb again. But I needed a pattern to tie the books together, so I thought color! Then I added alliteration. And of course Lena Frost is both beautiful and reckless in red.

My editor at Kensington, Esi Sogah, usually asks if I have any cover ideas, particularly if I have any images of the hero and heroine. For this book, along with some Thomas Lawrence portraits of nineteenth-century figures, I sent an image of a Victorian-era photograph of a woman standing before a low wall.

At Kensington, my cover designer was Janice Rossi, with Anthony Russo as the illustrator. Kensington assigned them to my book, and I’m so grateful.

Readers usually tell me they love this cover, particularly the dress and the rose! And I agree with them: it’s really lovely.

Reckless in Red was a finalist for the Holt Medallion in historical romance and first place winner for novels from the National Federation of Press Women’s communication contest. You can read it — and any of my books or novellas — as stand-alone works.

And I hope you give the world of the Muses’ Salon a try. 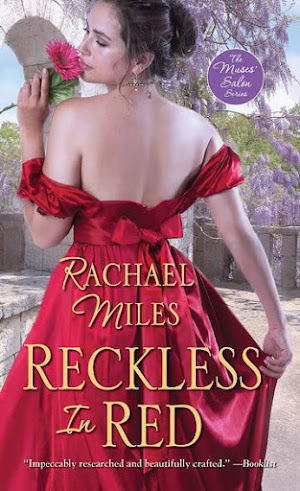 Lena Frost is a force to be reckoned with. A woman who has made her way in society without family or fortune, she’s about to realize her first big success as an artist. . . . Until her business partner makes off with her money, leaving her with little more than her hopes—and a dead body in her studio. Now Lena is at the mercy of a strikingly handsome stranger demanding answers she dare not reveal . . .

Is it her seductive eyes, or his suspicion that she’s up to no good that have Clive Somerville shadowing Lena’s every move? Either way, his secret investigation for the Home Office has him determined to uncover Lena’s hidden agenda.  But the closer he gets to her, the more he longs to be her protector. Is she a victim of circumstance? Or a dark force in a conspiracy that could destroy everything Clive holds dear?  Discovering the truth could have dire consequences, not only for Lena, but for his heart . . .

Reckless in Red was a 2019 finalist for the Holt Medallion in Historical Fiction and a first-place winner in the 2020 National Federation of Press Women’s communications contests in the category Fiction for Adult Readers: Novels.

Praise for Reckless in Red

An artist preparing a huge exhibition is disheartened when her business partner absconds with her money, but the event introduces her to an aristocrat who ultimately becomes her greatest ally against a shadowy enemy.

Artist Lena Frost is a survivor. She’s survived a weak father and a difficult stepmother. She survived in France during Napoleon’s war. She’s even rebounded from her lost career when she finally had to flee France after having been betrayed. Now she’s spent three years preparing a huge exhibition, which is the talk of London. So when her trusted business partner disappears with all her funds just two weeks before the gala opening, she’s nearly defeated. Especially when he leaves her an enigmatic message implying she’s in danger. But she can’t give up: “She would have to reinvent herself again. The very thought of it made her almost weak with despair.” Fearing she’s being followed, she winds up at The African’s Daughter, a bookshop owned by her Anglo African friend Constance Equiano, who introduces her to the Muses, a group of aristocratic ladies who meet monthly at the shop. Through them, she meets Lord Clive Somerville, brother of the Duke of Forster and the Regency equivalent of a forensic pathologist. When it becomes clear that someone is trying to kill Lena and more than one of her exhibition artists has disappeared mysteriously, Clive vows to keep her safe, help her open the exhibition, and discover who’s behind the threats. Author Miles continues her smart, intriguing Muses Salon series (Jilting the Duke, 2016, etc.) with another bright, accomplished heroine who fights for her happiness with an unexpected perfect match.

A unique storyline, a dose of suspense, and a circle of intelligent female friends enhance a successful romance.

The suspenseful fourth in Miles’s Muses’ Salon series (after Tempting the Earl) captivates with clever prose and an unconventional heroine. In 1820 London, painter Lena Frost drifts on the fringes of society due to her checkered past, but she hopes that her upcoming exhibition will catapult her into artistic fame. Her hopes are dashed when her business partner disappears with all of their money. Then several people, all with some connection to Lena, are murdered. Enter Clive Somerville, who is the younger brother of a duke and is a surgeon who serves among the Home Office’s investigative ranks. His inquiries into the rash of killings lead him straight to Lena’s doorstep. His fascination with Lena blurs the lines between suspicion and desire, and his urge to question her quickly transforms into a need to protect her. The only flaw in this intricately crafted historical romance is the unbelievable speed at which the connection between the protagonists develops. Readers looking for a change from Regencies will find this witty Victorian tale refreshing.