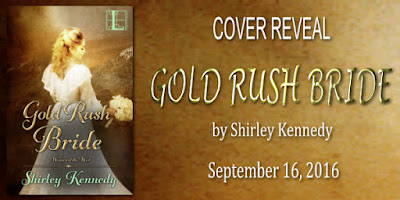 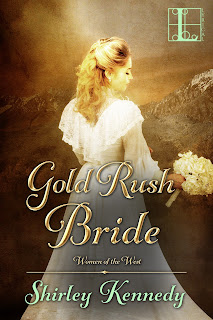 Title: Gold Rush Bride
Author: Shirley Kennedy
Publisher: Lyrical Press
Genre: Historical Romance
Format: Ecopy
Letitia Tinsley’s well-ordered spinster life is thrown into chaos when she learns her beloved brother has mysteriously disappeared from his gold mining claim in California. Determined to discover the truth, Letty sets out on the treacherous journey west. But there’s only one thing more perilous than a single lady traveling alone into the rugged frontier—and that is sharing the passage with Garth Morgan. The wealthy bachelor is astoundingly arrogant—and dangerously handsome. Worse, Letty is forced to lean on his strong shoulders, again and again…

Humbled by the harrowing expedition, Garth resolves to keep Letty safe—though the courageous beauty is unwilling to give an inch when it comes to trusting him. Still, despite her defiant resistance, he’s ready to stand with her as she faces the truth about her missing sibling. And by the time they reach California, Garth is determined to stake his own claim on the lovely Miss Letty—if only she will let him…

Shirley Kennedy was born and raised in Fresno, California. In her early career as an author, Shirley wrote traditional Regency romances, one for Ballantine, the rest for Signet. Later on, she branched into other genres. She lives in Las Vegas, Nevada, with her older daughter, Dianne, and Brutus and Sparky, her two editorial assistants who love to nap in the sunshine next to her computer while she works on her next book.